With nearly all precincts declared...

The story is leading the BBC News website at the moment and the language used in its main report is interesting. Despite, it seems, achieving a bigger % of the vote and winning by a great margin, Donald Trump is merely said by the BBC to have "won" and that he "looks set to extend his lead", whereas they say that Hillary Clinton has "triumphed" and is "on course for a resounding victory". 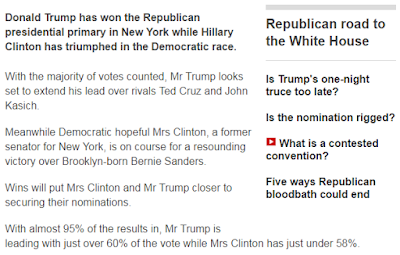 Ah, that takes me back!...(Please imagine a load of swirling harp music as a lead-up to this flashback)...