Naz Shah. What can I say? 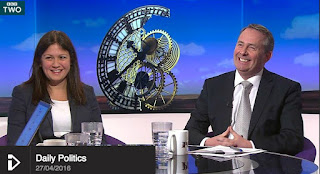 The Daily Politics tackled this issue. They were baffled. Where does it all come from, they wondered, not once mentioning the Muslims.

“How are these things not picked up during the selection process? asked Liam Fox.

Andrew Neil said:
What’s going through someone’s mind when you post “Let’s not forget that everything Hitler did was legal”

“I don’t know - some of the things you see on social media...” said Lisa Nandy.

“It’s like something from the Ku Klux Klan” continued Neil. “Adolf Eichmann suggested in 1940 that all Jews should be deported from Germany and he wanted to send them to Madagascar

Jo Coburn read out this rather impressive apology from the Jewish News.

I am sorry.
For someone who knows the scourge of oppression and racism all too well, it is important that I make an unequivocal apology for statements and ideas that I have foolishly endorsed in the past.

The manner and tone of what I wrote in haste is not excusable. With the understanding of the issues I have now I would never have posted them. I have to own up to the fact that ignorance is not a defence.

The language I used was wrong. It is hurtful. What’s important is the impact these posts have had on other people. I understand that referring to Israel and Hitler as I did is deeply offensive to Jewish people for which I apologise.

When the “Gaza-Israel” conflict happened I played an active role in highlighting the plight of the Palestinian people, attended demonstrations to stop the bombing and called for equality in media reporting of the issues.

Feelings were running high across the world and Bradford was no different. Hindsight is a wonderful thing and I’m shocked myself at the language I used in some instances during the Gaza-Israel conflict.

For this I apologise.

Since winning the seat of Bradford West I have made conscious efforts in areas around integration, building bridges and community development, in particular around Muslim and Jewish relations. Indeed one of my very first visits was to my local synagogue.

Only last week I was learning and sharing over an interfaith Passover seder with Reform Movement Senior Rabbi Janner-Klausner, Vice Chair of Conservatives Friends Of Israel Andrew Percy MP and  others at the rabbi’s home. We all read from the Haggadah and learnt more  about Passover.

I have been asked to consider joining the APPG, (All Party Parliamentary Group) on British Jews because of the work I’m doing locally, which includes building relations through my local synagogue.

If politicians put their hands up when they get something wrong it would help to restore faith in politics. I hope that by writing to those who I have hurt, I am practicing as I preach and calling myself out.

For those that I have caused hurt to, particularly the Jewish community, my constituents, friends and family, I sincerely hope my intentions and actions from here on in will win back your trust and faith in me.

For my part I promise to have open and honest  conversations about such issues  and invite others to do that with me. 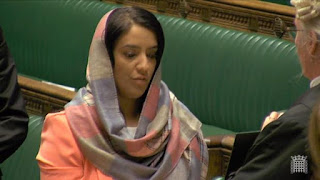 Later, in Daily Politics: Still puzzling over where this problem came from:

For most of my adult life antisemitism was predominantly the preserve of the far-right -  it’s what the National Front was all about. Marine Le Pen’s father was a Holocaust denier and it was always on the far-right of British politics that had that lingering antisemitism that was still there and when it rose up it was slapped down. Why is this now coming from elements of the left?

On the democratic left - they fought antisemitism. that’s why so many Jews joined the Labour party in the 1930s. Why has it now become - in a small element of the left - such an issue?But why?

It has always been associated In recent times with the far-right, but there is a far left element in this. In fact I was speaking in the US recently and I was quoting  Karl Marx - it was written in 1840 and he said ‘The essence of Judaism and the root of the Jewish soul was expediency and self-interest, the God of Israel is Mammon who expresses himself in a lust for money - Judaism is the embodiment of antisocial attitudes. There is an element in the left that has always taken these views. it needs to be stamped out whether it comes from right or left, it is fundamentally wrong and it degrades our society.

I think David Cameron ratcheted up the pressure on Jeremy Corbyn to act further on Naz Shah. He said it was quite extraordinary that she still had the whip. Now I do think that we should be watching this space through the course of the day. There has been, and it’s certainly the first time since I’ve been reporting on politics, ....the first time that we’ve seen this bubble up as a problem.

Where the leader of a party has been accused of not acting swiftly enough when these things pop up - and I - like you - can’t unpick the reasons why it’s become an issue now. And the Labour leadership has tried - you quoted John McDonnell saying ‘out, out,out’ -that will be what we do,”  but when these things bubble up and out,out, out is not the immediate response, it does leave the door open to people questioning why things aren’t happening quickly enough.


It has just been announced that Naz Shah has been suspended from the Labour Party.