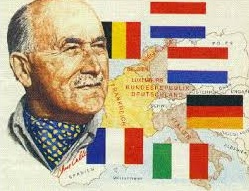 For more on Nick Robinson's Europe: Them or Us - in the light of an earlier post here, Did Nick Robinson re-write history? - Kathy Gyngell has written a powerful piece for News-watch which sets Nick R's dramatic re-casting of historical reality in a much fuller context: Them or Us? (Re-Visited).

The historical detail she outlines about the French 'Frangleterre' proposal that Nick R presented as Churchill's plan provides yet more evidence that the BBC man veered a long way from the truth.

This, again, was what Nick Robinson told BBC viewers:


There's one interview we haven't got, it's with the man who in many ways was the father of a united Europe. No, he wasn't a Frenchman, he wasn't a German, he wasn't a Belgian, he was, in fact, the British Bulldog himself, Winston Churchill. In the desperate days of June 1940, Britain's new wartime leader's first instinct was to go for full political union, quite unthinkable today. Churchill's plan, in a last-ditch effort to stop France falling to the Nazis, was that Britain and France would become a single country, an indissoluble union with one war cabinet running defence and the economy on both sides of the Channel. The British Cabinet backed it, but with one prophetic exception, they simply couldn't stomach the idea of a single currency. Days later France fell, and with it, at that stage, the idea of political union.

And this is what actually appears to have happened:


In order to show how risible – and deeply skewed – this interpretation is, the genesis and handling of the ‘Frangleterre’ idea needs unpicking.  It was born in June 1940 after Dunkirk fell and as the Nazi Blitzkrieg was heading towards France. The French cabinet was panicked and divided; prime minister Reynaud wanted resistance to continue while figures such as Petain were contemplating suing for ‘peace’. In this fearsome crucible, de Gaulle spoke to Jean Monnet (widely seen as the ‘father’ of the Treaty of Rome), who was then working in London with the War Cabinet on the North Atlantic supply route. Monnet had been developing ideas of a supra-national European Union since for at least two decades, and he proposed a daring plan: Franco-Anglo unification to fight on. De Gaulle decided he would put the idea to Churchill. Churchill himself was deeply cynical, but he had only recently become prime minister and knew he must put it to the War Cabinet as a whole. That happened the following day, and much to Churchill’s surprise, it was accepted as a possible way forward. Two provisos were added – that it would only be for the duration of the war, and there would be no unification of currencies. De Gaulle then took the proposal back to the French cabinet. It was rejected almost immediately. The reality was that many ministers believed the invasion of Britain by Hitler was only months away, and they were deeply angry at what they saw as the British collapse at Dunkirk. In the discussions that followed, Reynaud resigned and Petain took his place; within days the French cabinet was suing for peace with the Nazis.

The reality is that the ‘Frangleterre’ idea never stood the remotest chance of being accepted, and even if it had been, would have been only for the duration of the battle to defeat the Nazis. Robinson projected, in suggesting that it was the root of European integration – a provocative, deliberate, one-sided view of history. It is impossible to tell what was actually in Churchill’s mind in 1940 as the country he loved with a passion appeared to be rapid collapse towards Nazi domination. The paper trail left behind suggests that the War Cabinet backing of this half-baked Monnet plan for ‘Frangleterre’ was based only on expediency, and consider-all-options – however potty – desperation. Dunkirk had fallen; the horrors of the Nazi Blitzkrieg had been unleashed towards France and the United Kingdom, and both the British War Cabinet and de Gaulle were prepared to look at any options to prevent both invasion and the formidable might of the French navy falling into Nazi hands.

Nick Robinson is a former BBC political editor. It is deeply troubling that he should project such bias, at any time – but especially during the EU referendum. It seems that he deliberately chose to amplify the ‘Churchill is father of European unity’ concept. Clearly, no one at the BBC can see that bias. It is evidence of a deep institutional pro-EU mindset.

Correction: The article at News-watch was actually by David Keighley. Gremlins are to blame for Kathy's name appearing there. Winston Churchill didn't write the piece though, despite anything Nick Robinson might tell you.

Further update: David's updated News-watch piece (as Alan at Biased BBC spotted) contains a restated charge against Nick Robinson: that "he doctored some of the original commentary to make it fit with the EU’s hagiography about its formation."

That's a very good way of putting it (though I'm far too mild-mannered to ever express it like that) .

And, yes, I'm now even more convinced than ever: Nick Robinson definitely radically doctored the original commentary in a pro-EU direction.

This is outrageously clear BBC bias...

..though we seem to be pretty much alone in recognising this.

...and yet, that's probably why much-liked, easy-to-trust Nick Robinson might well get away with this, despite the high-powered complaints going in about it.
Posted by Craig at 14:53

Labels: 'Europe: Them or Us', Newswatch (blog)