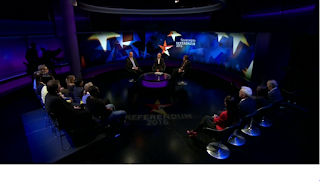 Regular readers yma (or may not) be wondering whatever happened to ITBB's Newsnight survey, which has looked at every Brexit-discussing interview on Newsnight since the start of the year so to try and determine, once and for all, if the programme has a pro-EU bias - especially in light of this June's EU referendum.

I left off about three weeks ago (since 29 March) when the list of guests showed (Remain/Leave-wise) the following 'balance':


What's happened since (not counting last night's EU special, as that will be included in the next lot of figures)? Well:

Add those onto the running total and we now have:

The Remain lead continues to grow - in this poll at least.

As for the sub-trend of Remain getting most of all of the solo appearances (i.e. not in joint interviews), well, that continues as well. I make the totals for that: