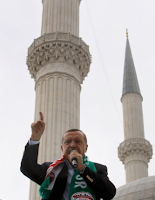 There was an interesting edition of Start the Week this week on the subject of 'Reporting War and Conflict', some of which focused on Turkey under Recep Tayyip Erdogan.

One of the points made was that Erdogan is fighting a particularly 'dirty war' in the south east of his country and that the Western media has been largely ignoring it, despite many atrocities being committed there. Some of these atrocities have been so bad, it was argued, that if they'd happened in Syria they would have been all over the news. And, it was also claimed, this "disgraceful" under-reporting is happening despite countless reporters being based in Turkey, sitting looking over the border looking at what's going in Syria (or sitting looking at the migrants going to and fro between Greece and Turkey).

Is the Western media (including the BBC) ignoring or downplaying the 'Turkey-Kurdish war' in south-eastern Turkey in order to stay on the right side of Erdogan? Of is that too conspiratorial?

Trying to check this out a bit, it does appear (to me) that some of the strongest claims of Turkish atrocities against the Kurds derive from reports from RT (Russia Today). Despite (and maybe also because of) Seymour Hersh's strong backing for the claims, that raises a few doubts in my mind.

My impression (rightly or wrongly) is that the BBC's coverage of Turkey under Erdogan used to be quite favourable. I recall the impression being given over many years that his AK party was 'mildly Islamist' and a sort of Turkish Muslim equivalent of Germany's Christian Democrats (a comparison I heard several times). Then PM Erdogan became an Israel-bashing 'champion of ordinary people in the Arab world' and during the 'Arab Spring' BBC programmes about, say, Tunisia's Islamist Ennahda party would suggest that such Arab Islamist parties were trying to follow the 'moderate' model of Erdogan's Turkey. My impression (again rightly or wrongly) is that the BBC only fell out of love with Erdogan when crowds of anti-Erdogan 'people like them' began flooding the squares of Turkey's cities in 2013 and a woman in a red dress got tear-gassed. Their coverage appears to me to have become somewhat more critical thereafter.

In the days when 'people like us' felt that the BBC was forever 'shilling for Erdogan, we'd post comments demanding to know why the BBC wasn't reminding us that the now-Turkish president once told a newspaper, "Democracy is like a tram. You ride it until you arrive at your destination, then you step off". As Erdogan is now 'stepping off' the tram with a vengeance (and 'we' are all thinking 'Told you so!), maybe the BBC will find itself having to use that quote after all, again and again and again.
Posted by Craig at 05:34