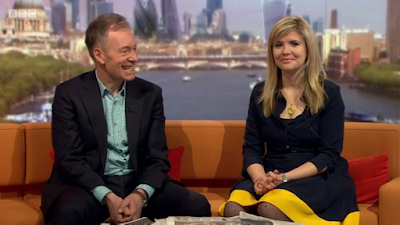 I don't think you can really claim to be 'live-blogging' something if the programme you're blogging about was first broadcast over nine hours ago, but still...

I had to smile at Andrew Marr's introduction this morning.

I'd already seen that novelist Tony Parsons and Emma Barnett of the Telegraph were going to be the paper reviewers. Writing about BBC bias, I like to place people politically for these kinds of programme and was aware that Tony Parsons has moved rightwards over the years, but (other than being a BBC Woman's Hour-presenting feminist) I wasn't too sure about Emma Barnett. Would Andrew Marr help me out with Emma? Well, no...though he couldn't have been more helpful to viewers who didn't know anything about Tony P's political opinions:

Reviewing the papers one-time Labour-supporting novelist Tony Parsons, who has now voted for UKIP and the Conservatives in recent years, and the woman's editor of the Daily Telegraph, Emma Barnett.

After initially raising an eyebrow, Tony Parsons eventually broke out into a very broad grin at that.

Is that what they call 'bias by labelling'?
Posted by Craig at 18:32