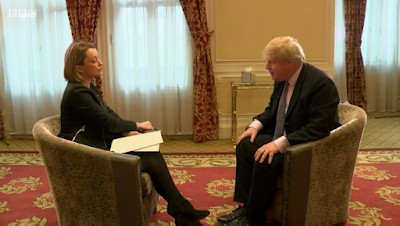 This changes the running total to:

Helpful angles in the opening headlines
For Leave: 0
For Remain: 1

The transcript for this bulletin is as follows:

16/4 Newsreader: Boris Johnson has delivered a blunt message to President Obama saying he should not back the campaign for Britain to remain in the European Union. The Mayor of London said it was be "nakedly hypocritical" in his words if the President gave support to Britain's membership of the EU when he visits the UK next week. Here's our political correspondent, Eleanor Garnier.
Eleanor Garnier: Up and down the country, it's Boris Johnson who is taking centre stage. At referendum rallies, like here in Newcastle today, he's urging voters to back the Leave campaign. But on a visit to the UK next week the U.S. president is expected to say Britain should remain in the EU - a likely intervention that Mr. Johnson condemned in an interview with the BBC.
Boris Johnson: I just find it absolutely bizarre that we're being lectured by the Americans about giving up our sovereignty, giving up control. You see, they wouldn't dream of sharing sovereignty. They wouldn't dream of it.
Laura Kuenssberg: So is he in danger of making America look like a hypocrite?
Boris Johnson: Not in danger of it. I'm afraid he is...There is an intrinsic hypocrisy.
Eleanor Garnier: Coming just a few days before President Obama arrives on another state visit to Britain Boris Johnson's plain speaking is brazenly undiplomatic. It's not the usual red carpet rhetoric rolled out before a presidential visit, especially for someone who aspires to live here [10 Downing Street] one day. But Boris Johnson likes to grab the spotlight and knows his comments will get people's attention. Senior Conservatives from the Remain campaign are not impressed.
Sir Malcolm Rifkind: I don't think he's thought this one through very hard. It's a pretty unwise and just naive comment to make. The United States has pledged to come to the defence of Europe if we're ever attacked - you know, to expose their own country to defend us. The idea that a president of the United States cannot express concern at the wider implications for the West as a whole...I don't think that's credible.
Eleanor Garnier: Any intervention has to be carefully managed. President Obama won't want to be seen to be telling British voters what to do. But Mr. Cameron will hope this special relationship will give his campaign the boost it needs. Eleanor Garnier, BBC News, Westminster.