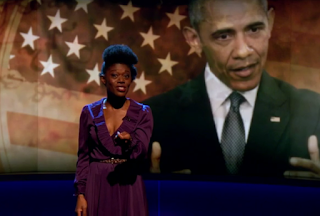 To mark today's 400th anniversary of the death of Shakespeare, last night's Newsnight began each of its sections with a quote from the Bard, performed by actress Akiya Henry.

To introduced its coverage of the Obama intervention in the Brexit debate, editor Ian Katz chose a passage from Henry V.

In the play, the Archbishop of Canterbury and the Bishop of Ely are discussing how wonderful Henry is, and the selected passage comes from the Archbishop's most lavish outpouring of praise to the new king:


Turn him to any cause of policy,
The Gordian knot of it he will unloose,
Familiar as his garter: that, when he speaks,
The air, a charter'd libertine, is still,
And the mute wonder lurketh in men's ears,
To steal his sweet and honey'd sentences;

Or to put it another way:

Bring up any complicated political topic, and he’ll untangle it as easily as if it were his own garter. And the result is that when he speaks, the very air—which is free to go where it likes—stops dead, and men stand in silent wonder, hoping to catch the benefit of his gorgeous utterances.

Obama as Henry V? Thanks for that Newsnight!

I don't think anyone would have thought of illustrating David Cameron's performance yesterday with "Valiant Lord Talbot" from Henry VI , Part I:

Then strike up drums: God and Saint George for us!