"This is the strangers’ case; And this your mountanish inhumanity"


The Mail on Sunday has the following: 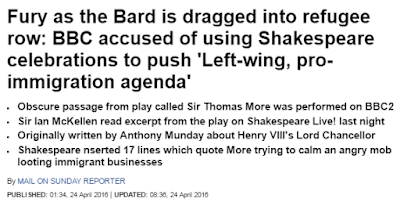 They've gone out of their way to find a piece of writing which fits the Left-wing establishment's pro-immigration agenda and it's a shame.

You'd have thought they could at least have found something which was published under Shakespeare's name for a start.

Only later in the piece does it emerge that the passage was chosen by Gregory Doran, artistic director of the Royal Shakespeare Company, rather than by the BBC.

That said, the BBC was responsible for broadcasting the same speech on Newsnight back in March, and Newsnight's YouTube video of the performance is captioned:

Published on 15 Mar 2016
What would Shakespeare make of the refugee crisis? He imagined Sir Thomas More delivering a powerful plea on the issue - which Dame Harriet Walter performed for us to play out the programme. It's Shakespeare's last surviving handwritten play script.

It is a powerful piece of dramatic writing - and Harriet Walter gave a powerful reading of it - but is it really "Shakespeare's take on the refugee crisis"?

Obviously not, in the literal sense, given that he died nearly 400 years before the present migrant crisis began! And also - more seriously - because it's usually considered naive to assume that what a character says in a play is a simple reflection of what the playwright himself believes - especially if that playwright is the famously hard-to-pin-down Shakespeare.

The BBC may not have been making a point last night but I think it would be hard to dispute that Newsnight was trying to make a point (the very same point as Gregory Doran) back in March. There was nothing disinterested in their choice of story (the British Museum putting the manuscript online).
Posted by Craig at 12:37