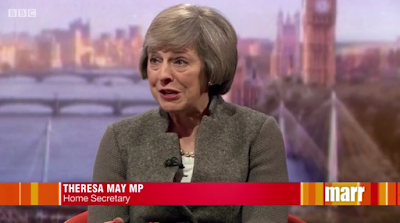 I have to say from reading the comments from Grant & Co. at Biased BBC today I guessed (before catching up with it) that Theresa May had experienced quite a grilling from Andrew Marr this morning.

With one exception (a newbie who wrote that "Andrew Marr was excellent in interviewing Theresa May") no-one talked about Andrew Marr or BBC bias, simply about how poorly Theresa May had done.

That was my clue.

Andrew Marr's first question - "If we stay in the EU will immigration go up or down?" - was the sort of question 'people like us' wanted asking, and he asked her it. And he then pressed her on the 3 million immigrants missing from George Osborne's dodgy dossier - and other immigration-related matters relevant to the EU referendum.

He struck me as being surprisingly tenacious about it. He even asked her about the couple from Wolverhampton bludgeoned to death by migrants.

What more could 'we' ask from him? (I want the moon on a stick.)

When he eventually moved off immigration, he even asked her this (which made me laugh):

Don’t you think though if you were a Leave or a Brexit voter and you looked at today’s papers and there are the Obamas and the Royal family and Prince George, and there’s President Obama playing golf in the golf buggie with David Cameron, and there’s President Obama being interviewed by Huw Edwards on the BBC, you would say this is an absolute establishment classic stitch-up. This is the big people ganging together to try and bully voters into reclaiming their country – against reclaiming their country.

Fancy him linking Huw Edwards of the BBC with "an absolute establishment classic stitch-up"!
Posted by Craig at 18:18