"This feels like it could be a very big moment indeed" 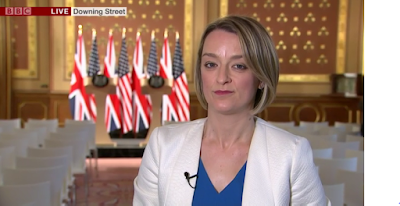 Back on the subject of the BBC One News at Six, Laura Kuenssberg gave her BBC Political Editor's view of the Obama intervention:

Well Clive, this feels like it could be a very big moment indeed because, in the last few minutes, basically what's happened is: the most powerful politician in the world has said that David Cameron is right in the European Union debate and his rivals are wrong.

Now, President Obama when asked why it was any of his business insisted he wasn't interested in fixing any votes but, frankly, if Downing Street had written the script for him it could hardly have been more supportive.

And particularly, one of his messages that I think we'll hear again and again through this campaign, with the economy absolutely the disputed territory at the heart of this campaign, is President Obama's suggestion that if we left the EU then Britain would go to the back of the queue in terms of trying to do a trade deal with the United States.

Leave campaigns say that's something we could do. They try to breeze over that, saying it could easily be achieved. But President Obama has suggested it would be very, very difficult indeed.

And that message, that I'm sure will go from the grandeur of this room here in the Foreign Office, to villages, town and cities around the country as we get into the campaign in the week's ahead.

Nice use of the phrase "breeze over" there, by the way.
Posted by Craig at 10:16