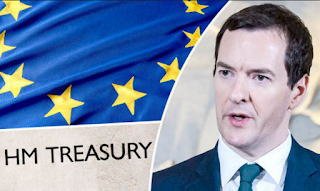 Fraser Nelson of the Spectator has rather hotly called out George Osborne over his "deceptions":

So having established 1) a means of dressing up an increase as a decrease and 2) a bogus conflation of GDP with household income he comes up with his grand deception:-

‘Britain would be permanently poorer if we left the European Union, to the tune of £4,300 for every household in the county. That’s a fact everyone should think about as they consider how to vote.’

It’s not a fact: it’s an invention.

He's not impressed with the Chancellor at all, to put it mildly:

As a Europhile, these are the kinds of tactics that make me want to vote ‘out’ – the appalling level of dishonesty with which the government is making the case. And as a journalist, it’s a red rag: we enter this profession to try to stop people being misled by politicians.

The relevant bit for this blog is what he writes next:

And while Nick Robinson did a brilliant job on Today, the BBC’s website is now Britain’s most-read news source (four times as popular as any newspaper) and it repeated Osborne’s bogus £4,300 line uncritically.

There are two parts to that, of course: his praise for Nick Robinson's 8.10 interview with George Osborne and his criticism of the BBC News website.

I completely agree with him about that interview.

Credit where credit's due, I think that Nick R skilfully exposed the Chancellor's slipperiness. He questioned the assumptions underlying the Treasury's assertions and, I think, made George Osborne sounds like he was bullshitting (which he was!).

I presume the BBC website piece Fraser was criticising there is the main article on the story - the one that's been leading the website all morning and which hundreds of thousands, possibly millions, of people, will have either read or glanced at.

I've checked the NewsSniffer versions too, and Fraser Nelson does have a point. That bogus £4,300 figure is quoted uncritically there, with no 'analysis' questioning it.

For the main BBC online news report on the government's 'killer' argument - the big one! - it's not acceptable for them to have simply reported the Treasury claim, is it?

Still, at least that article now contains a link to the latest Reality Check post from Anthony Reuben. Hopefully at least a good number of website readers will have clicked on it.

Mr. Reuben's opening words are unambiguous. The £4,300 is bogus:


The poster at George Osborne's event this morning was very clear - that there would be a £4,300-a-year cost to families by 2030 if Britain leaves the EU.
It's not true. The government is confusing GDP per household with household income.