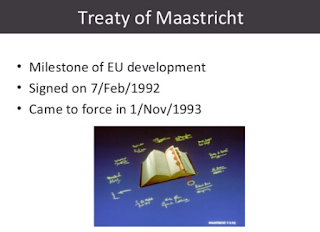 (With a huge h/t to David Keighley at News-watch)...

Here's a transcript of the final part of Professor Anand Menon's How the European Union Works series for Radio 4's The World at One.

You will note that Prof. Menon is attempting to knock down another major pro-Brexit point: the claim that the EU today isn't what we signed up to.

He argues that's irrelevant as all the subsequent developments came about through the decisions of member states (including the UK), including the Maastricht Treaty - which rather misses the point, I think, that the British people haven't had a say in any of those massive developments (until now) for over forty years.

Any why are we so different? We'll, for Anand Menon, it's because we're an island (like Ireland, Malta and Cyprus), we weren't traumatised by the Second World War (hmm), and (as per Nick Robinson's programme) we arrived too late to shape the EU in our image. Oh, and we're more mercantile-minded than the rest of Europe (a nation of shopkeepers, so to speak).

Here's the transcript. Please see what you make of it:

MARK MARDELL: How much has our relationship with the EU changed over the years? In the latest of our series in the run-up to the referendum, here’s Anand Menon, Professor of European Politics at King's College London and Director of the think tank UK in a Changing Europe.

ANAND MENON:  In this referendum campaign there are lots of people saying the EU of today isn’t what we signed up for.

But the EU has changed through a series of large decisions to which all member states have agreed. When the treaties are changed every member state be it Luxembourg or Germany gets a veto. Nothing, therefore can be forced on a member state in terms of treaty change against its will.

This is nicely encapsulated by the famous Maastricht Treaty which was finally approved in 1993. Now, this was a crucial turning point for European integration because European integration moved well beyond the market to lots of other things.  Maastricht laid the basis for the euro. Britain, of course, got an opt-out.  Maastricht talked about the EU having a foreign and security policy, though let's be honest nothing much has come of this.  Maastricht also lay the basis for the EU dealing with issues of justice, borders, migration and so on so, though again without really giving the European Union any powers over those areas.

The fact is that we in the UK are different when it comes to European integration, and we look at it in a way other member states don't. And I think there are several reasons for that:

One, and it’s hackneyed but probably still true: we're an island and being an island we look at our neighbours differently. We don't get their TV beamed into our homes in the way that you would do if you're French and you lived in Alsace with German TV. We can’t drive over the border to a neighbouring country for lunch.

There’s also history. The original member states of the European Economic Community turned towards European integration partly because the war had underlined the failure of their national systems – failure either because it had spawned Nazism, in the case of Germany, or because it had spawned defeat in the case of virtually all of them.  We in Britain don’t have those memories and so we didn’t have that sense of weakness that lay behind the initial steps towards European integration.

And thirdly, of course, there’s the fact that we joined late and that has coloured our experience, partly because we joined an organisation whose rules have been set by other people, there wouldn’t be a common agricultural policy in the way there was, had we joined from the start.  And as newcomers, therefore, we were having to get used to a club whose rules weren’t written for us.

In Britain, in contrast, and because of the circumstances in which we joined, European integration is an economic project for economic reasons. We joined in the 1970s largely because our economy wasn’t doing very well and the continental ones seemed to be doing much better.

That's one of the reasons why we tend to be transactionalist when talking about the EU - we don't refer to some higher political narrative about how good European integration is, we think to ourselves ‘what are the costs, what are the benefits, and is it worth it?’

This whole World at One series - always presented as 'impartial' - has been pro-EU-biased from the start. It's absurd that the World at One put it out simply as being an academic guide to how the EU works rather than as a 'point of view'.

This has been clear BBC bias in action all week, in my opinion. Only a similar series from a clearly pro-Brexit academic (similarly presented as a neutral, disinterested academic from a think-tank) will suffice to make up for it...

...and I'll go out on a limb right now and predict that won't be happening in a month (or two) of Sundays.


As Hildegard sings...'Anand Menon! Anand Menon!' (music that twice features an orchestral gesture that's been described as like a giant fist rising through the orchestra. See if you can spot it!)

Labels: 'The World At One', Anand Menon