These views are personal and do not reflect the official views of this blog.

Did anyone read Rod Liddle’s witty article “Why I feel compelled to defend Boris” which was penned following attacks on Boris by Matthew Parris and Petronella Wyatt, both of whom wrote beastly pieces in the press about their former colleague and 'amitié amoureuse' (respectively.)

I have to admit I haven’t read Matthew’s piece, but I did read Petronella’s article in the OMG the daily Mail, which I thought was as affectionate as it was attacking, since the impression she gives is that Boris’s private persona is very like his public persona. Sort of what you see is what you get.

Boris’s quirks don’t seem to dent the public’s affection for him, and Petronella’s veiled insinuation that these imperfections might make him unsuitable for the top job smack of Princess Di.  We’re still waiting to see how that works out, but I daresay pronouncements from ‘women scorned’, so to speak, aren’t particularly relevant in the overall scheme of things. 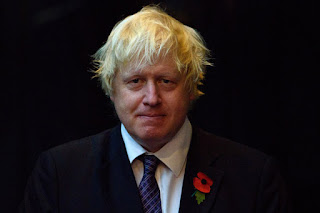 The public’s view of Boris is likely based on his past performances on HIGNFY (warnings about past performances not guaranteeing future results duly heeded.) Sort of bumbling and bemused. We can also go on those barbed yet jocular two-handers with Jeremy Paxman, and Boris preemptively deflating Paxo’s pomposity is a joy to behold.

A snippet here and an oddment there is all we get to go on when opining on public figures we don’t actually know. Rod Liddle’s excellent columns in the Sunday Times and the Spectator are tinged with stuff that’s a bit off, so I see Rod in a curate’s egg kind of way, mostly good, but bad in parts.

In this piece, Rod admits (almost boasts) that he once got Boris into trouble through recounting a tale about a Unicef sponsored trip to Uganda the pair took together, pleading that he meant Boris no harm. The punchline involved quoting Boris’s remark:

‘And so on to the next bunch of grinning piccaninnies.’

As if Rod didn’t know that this would would excite a hysterical backlash and an automatic outbreak  of Twitterplexy.  He must have known then, and by jove he might have just done it all over again now.
As Rod himself said of Petronella: “In fairness, Petsy attempted to disguise her attack as a sort of semi-affectionate defence” which tempts the reader to interpret Rod’s article in exactly the same way, namely that it’s also a semi-mischievous attack disguised as a semi affectionate defence.

However Rod’s entertaining description of the bonkers UN project - a women’s drop-in centre in the middle if nowhere - is very funny.

On the other hand, I didn’t like his earlier piece about anorexia. Opining on something you know nowt about is risky, as Joan Bakewell found out. The very first thing any eating disorders specialist will tell you is that anorexia nervosa is the deadliest of all mental health conditions. So what if anorexia is mainly a disease of the middle classes and affluent? What of it? It doesn’t matter what it’s triggered by, by the way. It’s serious and not a topic to treat clumsily.

However, on the whole Rod’s writing is always entertaining and he often boldly goes where no man has gone before, which brings me to Stewart Lee, where the opposite seems to be the case.

I wrote about Stewart Lee the other day. Then I read a review in the Times, which made me realise that I’m not the only one who’s mystified by his comedic popularity, if there is any.
D’you know many people who turn into David Brent and they don’t even know it? Some people do that accidentally, others do it slightly on purpose, probably because they realise what they’ve just done, so pretend it was deliberate all along.  Damage limitation, I think that’s called.
Stewart Lee thinks ‘faux deep thinking’ is humorous, but without Ricky Gervais it’s not all that funny, and it becomes less funny the more one labours it.

Those lengthy riffs -  just farting noises or spluttering into the mic - are more tedious than watching someone else in a prolonged trance. He’s also laughing and sneering at the audience (us) while trying to entice the live audience to conspire with him in laughing at us. Then he turns on them, too.  It’s how bullies operate, and that’s one of the reasons it’s not funny. The other reason is because it’s not funny, (unless you think that making spluttering or farting noises into the microphone is funny, and funnier and funnier the longer it goes on.)
The self-reflective interventions with Chris Morris as a kind of therapist might have been a ploy to get us onside after all, but they too were so ironic and sneery that they did not have that effect.

His theme, by the way, was not migration, as trailed. There was no punchline. Making the audience wait for a punchline that never comes must have been the joke. He must have thought it sufficiently hilarious that the audience were swindled out of a long-awaited punchline.

The theme was that Rod Liddle looks like a man with food-stains on his person, which turned into a protracted self-congratulatory lecture on Stewart Lee’s own poetic genius in respect of the type of stains and food particles that adhere to Rod Liddle.

Stewart Lee doesn’t seem to like the audience at all, which is not very endearing.

Before I go, can I just remind you that these views are personal and do not reflect the official views of this blog.
Posted by sue at 14:51