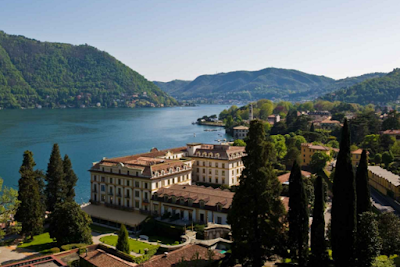 I've mentioned before my envious feelings towards Mark Mardell.

Quite how he manages to wangle so many licence-fee-funded trips to sunny locations is beyond me, but all credit to him for pulling it off so often!

For this weekend's The World This Weekend he'd clearly wangled himself a trip to the shores of Lake Como in Italy for a few minute's worth of interviews with people attending a high-powered think-tank conference in a luxurious palace.

Look at the picture above. That's where he's been (the lucky beggar)!

The conference crowd talked tax avoidance, social inequality, "populist parties" and, above all, Brexit - and they were against all of them.

The central Brexit section featured an Obama advisor praising the EU and talking up the "uncertainty" of Leave...

...then a Chinese economist doubting the British people would "be so stupid as to vote for leaving the EU", and saying that the UK benefits economically from the EU...

...then a German minister saying the UK would suffer after Brexit...

...and then a more extended interview with a major global investor who said a Brexit wouldn't produce "an amicable divorce", would be a waste of energy, would be "damaging economically", would damage her business, would "have a big impact long-term", and would reduce the UK's GDP by 3%.

And in all of these interviews and mini-interviews you won't find a great deal of contradiction from the BBC's Mark Mardell.

So the stage was set. The case against Brexit was made from four authoritative voices (the last a female, British one). It was now time for the 'balancing' big interview with Labour donor and businessman John Mills - a veteran of this Leave campaign and, indeed, the 1975 Leave campaign.

Now, the answers from Mr Mills haven't stuck in my head the way Mark Mardell's questions and the earlier (anti-Brexit) contributions have stuck in my head. (Is that just me? Or would it have been most Radio 4 listeners' experience?)

This felt so lopsided as to strike me as being deeply biased, but if I were to complain to the BBC about it (which I well might) they'll only say that John Mills was given a full-length interview and given the opportunity to respond to the points made earlier and, therefore, that due impartiality has been duly satisfied.
Posted by Craig at 17:32