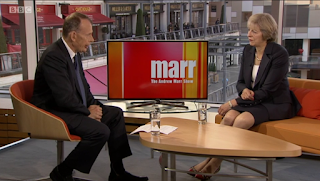 Andrew Marr got himself a scoop this morning (though he didn't seem to immediately realise it) with Theresa May announcing on his show that Article 50 will be triggered before the end of next March.

Mrs May herself put in an assured performance. She even made a point that hasn't been made often enough (and never made, as far as I can recall, by BBC presenters on programmes like Newsnight) - and it's a point that's highly relevant whenever embittered Remain voters complain (sometimes sarcastically) about parliamentary sovereignty being overruled by a plebiscite, thereby suggesting that (Remain-dominated) Parliament might be within its rights to overrule the result and block Brexit:

and she talked a very good talk on bringing about Brexit:

...and I think anybody who's looking at this Repeal Bill - which will repeal the European Communities Act, will make us that independent, sovereign nation once again, able to determine our own laws - anyone who's looking at that should remember that this is about delivering to the British people. And it's not just about leaving the EU; it's about that essential question of the trust that people can have in their politicians. The people have spoken. We will deliver on that.

Her premiership, however, will depend on her successfully making that a reality (he says, sounding like a BBC journalist stating the bleeding obvious).
Posted by Craig at 11:52