The third story on the BBC News website this morning is this: 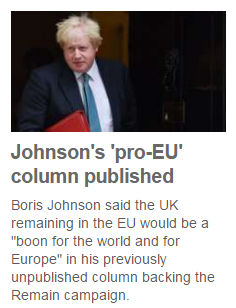 This is based on a somewhat sensationally-presented report in The Sunday Times, which has now printed Boris's 'secret' alternative, pro-Remain article. The paper's main report goes on to puts it (less sensationally) in context:

The text of Johnson’s column is published in this section. Its existence was known but its contents, which contradict positions the foreign secretary has adopted since he joined the cabinet, have remained secret.

He wrote it on February 19, two days before shocking Cameron by opting publicly for the “leave” campaign. He had already penned one piece arguing the case for “out”, then wrote the “remain” article as a way of clarifying his thoughts, before composing a final article backing Brexit for publication.

The book dispels the myth that Johnson’s case for “remain” was better than his argument to “leave”. In fact the article was dashed off quickly and seems to be an attempt by Johnson to convince himself the case for staying in was weak. But it nonetheless shows some of the concerns he had about leaving the EU.

Fraser Nelson at the Spectator agrees with The Sunday Times and reprints and annotates the Boris article (useful for those of you who can't see behind the Sunday Times's paywall).

"Rather than damn Boris, I suspect his “secret” article will underline the authenticity behind his support for Brexit", Fraser writes.

Though the BBC article is a fair reflection of the account given by The Sunday Times, it adds a gloss of its own, betraying its own (anti-Brexit) bias.

A-Ha! Finally he’s going to tell us about the downsides of Brexit. The one he’s supposed to really believe in.


There are some big questions that the “out” side need to answer. Almost everyone expects there to be some sort of economic shock as a result of a Brexit. How big would it be? I am sure that the doomsters are exaggerating the fallout — but are they completely wrong? And how can we know? And then there is the worry about Scotland, and the possibility that an English-only “leave” vote could lead to the break-up of the union.

Was that it? As it turned out, the Doomsters were wrong. Everyone who predicted a recession after the vote – from the FT’s economics editor to the IMF – has now withdrawn their prediction.  Scottish polls show no increase in support for independence after the Brexit vote.

...with what the BBC wrote:

Mr Johnson also warned that Brexit would cause an "economic shock" and could lead to the "break-up" of the UK.

He wrote: "There are some big questions that the 'out' side need to answer.

"Almost everyone expects there to be some sort of economic shock as a result of a Brexit.

"How big would it be? I am sure that the doomsters are exaggerating the fallout - but are they completely wrong? And how can we know?"

Since the vote to leave the EU the pound has fallen to its lowest since the 1980s, losing around 18% of its value against the US dollar, while Scotland's First Minister Nicola Sturgeon has put in place plans for a second independence referendum if the UK leaves the single market.

The contrast could hardly be starker.

Each has their own bias, though only one is funded by the licence fee and is meant to be impartial.
Posted by Craig at 09:38