Evan Davis does it again 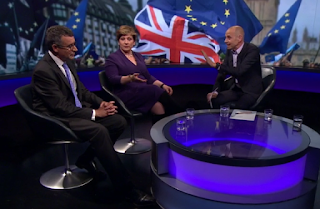 He did it in all six of the pre-referendum Newsnight EU specials and he's been doing it ever since the vote too, even when - as on last Monday's edition - the pro-Brexit guest is a mere backbencher (Bernard Jenkin) and the anti-Brexit guest is a senior opposition frontbencher (Emily Thornberry).

That discussion was especially typical of Evan Davis in that he 'did an Evan Davis' and interpolated his own criticisms (of the Leave side) before changing the subject. Here, following on from Emily Thornberry's criticisms of Leave, Evan added:

It's an important point that we're not holding the Vote Leave accountable for all of their promises cos it's not giving us £350 million extra a week for the NHS so we shouldn't let it say 'This is one thing but we're not going to do that other'. But I put it to you [Bernard Jenkin]: Norway is not in the European Union. Correct?

Of course, Evan was echoing (and endorsing) John Simpson's complaint about the BBC not challenging the Leave side enough over their use of statistics - a complaint some on the Remain side, especially in the Guardian, but also the IFS, Cardiff University's media unit and several key BBC presenters (Justin Webb, Eddie Mair, etc) have also been echoing - and which the BBC's own 'impartiality review' (involving Cardiff Uni and the IFS) also recommended.

The head of steam for the BBC to be even more biased towards pro-Brexit guests is now gathering considerable speed.

Incidentally, the main Brexit-related angle on Monday's edition was framed in the following way (with a increasingly familiar Remain talking point):


Also tonight: We're leaving the EU partly to restore power to our great parliament. So should our parliament not be allowed some say in exactly how we leave?