Pundits; what do they know?

Isn’t it unsettling when the TV pundits evidently know less than you do? I want them to know more than I do otherwise what’s the point?

I’m not talking about the I/P conflict for once - you’ve undoubtedly already written that off as the topic no-one wants to know very much about. A few judicious cries of “What Israel is doing” and “Shame on you” should suffice.

No, I’m referring to the extraordinarily pedestrian discussion about the UKip leadership contest on today’s Sunday Politics, with Tim Shipman, Isabel Oakeshott, Steve Richards and of course Andrew Neil.
They began talking about Raheem Kassam, whom some people believe is a strong contender.
“He’s something to do with Breitbart, isn’t he?” said Andrew, looking rather pleased with himself.
“He’s extremely right-wing” asserted Isabel,” he has a picture of Enoch Powell by his bed” (or words to that effect)

Well, did you know, as I’ve just found out, that Raheem Kassam’s favourite journalist is Rod Liddle? (I thought Rod was supposed to be a bit of a coconut - wobbly leftie on the outside, wibbly righty on the inside. Or something like that. Did you read his amusing piece on Baroness Tonge in the Sunday Times (£)) 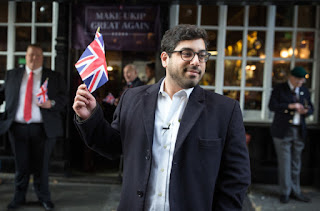 I actually read that scintillating insight (and others) into Raheem Hassam on Buzzfeed. It’s not a site I’d normally look to, and I don’t expect the BBC would see it, as you’d have to go to the trouble of Googling ‘Raheem Kassam' to find it. And interestingly it also sheds a tiny bit more light on the intriguing bust-up between Kassam and his former business partner Robin Shepherd. It’s weird that hardly anyone brings up this mysterious and very acrimonious fight when the UKip leadership issue comes up, since skeletons in closets are the driving force behind much of our current political discourse.

So here, for the information of the Sunday Politics team, is the link, and a brief extract.

“By this point he had become a pundit, and sought funding from “pro-Israel, anti-Islamism” American neocons to run a blog called The Commentator with fellow activist Robin Shepherd. The pair split in incredibly acrimonious circumstances in 2013.

“Working with Raheem Kassam was a nightmare,” Shepherd said when contacted by BuzzFeed News this week. “I formally reported him to the police on suspicion of fraud. Since I had never before reported anyone to the police, perhaps a reasonable observer might wonder why that seemed necessary. Kassam is a psychopath, and a crook. Kassam is a nasty piece of work, and prides himself on being so. Being a ‘wrong ’un’ is something he relishes, as do the shabby characters who associate with him.

“Raheem Kassam is a danger to British democracy, and the rule of law. I saw at first-hand behaviour that was so appalling it was, and remains, difficult to internalise.”

In response, Kassam says Shepherd wrongly accused him of taking thousands of pounds from the blog when the business venture collapsed: “We never codified the relationship between us. When we had a bust-up he said I was sacked.”

Kassam said he went back to the American donors. “I said, who do you want to keep the money? Me or Robin?” He says the donors chose him, much to the anger of Shepherd, who struggled to deal with this and has written furious posts about the situation ever since.

Oh well, we still don’t know exactly what has happened, but then, neither do we know the fine details of various other game-changing revelations that have been given the full-on  press coverage, which (arguably) are designed to scupper certain political ambitions. I just wish the pundits knew what they were talking about so that they could tell us.
Posted by sue at 19:19