I took advantage of last night’s insomnia by switching on the TV and watching two adults acrimoniously slagging each other off for our entertainment. (Not the Jeremy Kyle show)

This morning various organs of the MSM presented their own special selections of the ‘best bits’.
Early on, the BBC chose clips that made Hillary look good, whereas right-leaning media highlighted Trump’s mini victories, such as when Hillary constructed a cavernous own goal, saying something like: “Thank goodness Donald isn’t in charge of the law” to which he quickly replied, “Yes, because you’d be in jail”

As the day wore on, I think the BBC did become more balanced but I’m open to other ideas on that.

For me, the most obvious take-away was that - for both contenders - it was a damage limitation exercise, in Trump’s case a matter of urgency, since  locker-roomgate was fresh in our faces, while the world has had more time to absorb Hillary’s misdemeanours.

Hillary accused Trump of ‘deflecting’, which he certainly was - how could he not? - but seemed unaware that she was doing exactly the same.
At one point she brought up the good advice of her friend Michelle Obama - “When they aim low, we aim high”. A Sky News reporter confused the mere act of stating this virtuous aspiration with actually achieving it, when in reality Hillary continually fired off a number of ‘low blows’ of her own.

Throughout the show, Trump prowled around the arena in a menacing and deliberately intimidating manner, creepy clown style. 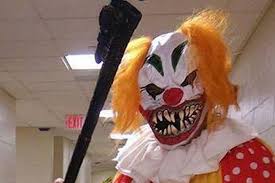