Sir Craig Oliver gets it wrong

On this week's The Media Show, Sir Craig Oliver got to complain about BBC 'false balance' during the EU referendum campaign and used the following specific example:

One of the stories that I tell in the book is: George Osborne and I were standing outside the Prime Minister's office on Sunday evening watching the BBC News, about to go into a meeting. And in the morning Penny Mordaunt, who was a government minister, had said that Britain does not have a veto on Turkey joining the EU. It does. It's a straightforward fact. And yet all day long on BBC bulletins, on BBC online, we were struggling to say, "But why can't you just say 'It's not true' right from the off? Help people understand this story because she's just got it wrong".

And we watched the bulletin and there were two packages about Turkey in that bulletin that night. And at the end we just looked at each other and said, "What hope do the viewers have in understanding this?" because at no point was it made crystal clear that there are no international experts at all who think Turkey is going to join the EU in the next few years and Britain does have a veto and France, you know, I think, has to have a referendum.

And I'm just saying that what needs to happen...and it's not just me that's saying this but Paul Johnson from the Institute for Fiscal Studies, who did a report for the BBC on this subject...when you speak to BBC viewers and listeners and readers online they feel incredibly frustrated because they feel they're just getting 'on the one hand, on the other' and saying 'Help me out!'.

Well, it looks as if I'm going to have to do what Sir Craig demands on the BBC's behalf - as The Media Show didn't do it here - and 'help' people out by pointing out that Sir Craig himself 'just got it wrong'.

What you've just read above from Sir Craig Oliver is simply not true, and I know because I wrote a piece about that very Sunday evening bulletin (including some transcriptions) and, as you will see, the former Downing Street spin doctor was wrong on several counts.

He said the BBC didn't say that Penny Mordaunt was "wrong" when the BBC actually explicitly did say that she was "wrong" - and the BBC's Alex Forsyth even used the word "wrongly"!

And when he said that "at no point was it made crystal clear" about international experts saying there was no chance of Turkey joining the EU in the next few years, he 'forgets' that Alex Forsyth not only made that clear, saying herself "It is in fact some way off" but also featured Prof. Anand Menon (an expert) saying "it's not anywhere near becoming an EU member".

The BBC could hardly have done Sir Craig's bidding better.

So, Sir Craig Oliver is behaving like Coco the Clown here and talking out of his newly-knighted behind.

Even his bit about BBC online is wrong. The BBC News website's Reality Check feature did rubbish Mrs Mordaunt's claims "right from the off" and "helped people understand this story":

So Sir Craig was comprehensively wrong.

On a related matter incidentally, why, whenever he uses this Turkish accession example on the BBC (as I've heard him do before), does no BBC interviewer ever ask him about his boss David Cameron's Turkey unlikely to join EU ‘until the year 3000’ claim? That claim was surely at least as worthy of a BBC 'reality check as Mrs Mordaunt's claims?

Anyhow, here's the relevant bit from my original post (from Sunday 22 May) in full just to show just how wrong Sir Craig was here. (I'll be charitable and put it down to 'confirmation bias' on his and George Osborne's part): 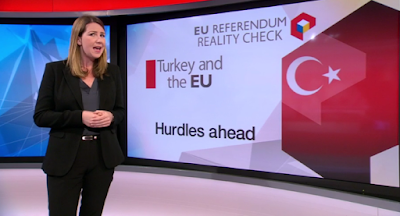 Referendum battle lines are drawn over the Health Service and the chances of Turkey joining the EU. With controversy over what future migration levels might be David Cameron clashes with one of his own ministers on whether Britain could veto Turkish membership. The head of NHS England says the Health Service would be effected in a UK exit caused an economic slowdown. We'll be exploring the latest arguments from the two sides, with less than five weeks to go.

The bulletin (courtesy of BBC reporter Alex Forsyth) quickly - and explicitly - ruled who was right and who was wrong over that Turkey 'controversy':

Sitting on Europe's south-east flank, Turkey's now at the centre of this referendum battle. Its role in tackling the migrant crisis has renewed talk of it joining the EU, and that's allowed those who want the UK to leave to raise questions about immigration and security. Like this minister [Penny Mordaunt] who today wrongly claimed the UK had no power to stop Turkey joining.

So put that in your pipe and smoke it, Penny! (according to the BBC).

We then got clips of Dave and Boris both saying (in the past) that Turkey should join the EU.

Then Alex did a 'Reality Check' for us. She 'made it clear' that Turkey wasn't going to be joining the EU any time soon. And blog favourite Prof. Anand Menon (the one who did that massively pro-EU series on the EU for The World at One) then duly appeared as Alex's 'talking head' to say (correctly) that the UK has traditionally been Turkey's biggest cheerleader as regards its entry into the EU and to emphasise the point that it's not "anywhere near becoming an EU member". And Alex then capped that by saying of Turkey's prospective EU membership, "It is in fact [emphasis hers] some way off..." (BBC message reinforcement on overdrive, I think, here!)

So relax about Turkey! (And don't, whatever you do, mention that Turkey has already been granted free visa access to the EU as part of the panicky EU-Turkey migrant deal!  {Edit: But see comments below}.)
Posted by Craig at 08:24