The Times seems to have an inexhaustible number of TV reviewers, but the the one I usually agree with is Andrew Billen, so it was reassuring to read his take on Sally Phillips’s debut documentary “A World Without Down’s Syndrome?” 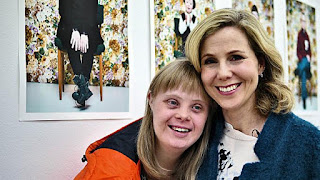 Sally Phillips used a number of tricks from ‘The Office’ to soften the effect, but we were undoubtedly being manipulated. The development of a new non-invasive technique for detecting Down’s Syndrome in early pregnancy has raised an ethical dilemma. Will the increased number of aborted Down’s children lead to a kind of ethnic cleansing? Will the ‘Down’s community’ become extinct?

Sally Phillips has a delightful Down’s son and his lovable and loving personality gave an insight into what life could be like for families like hers.
Personally I could have done without the jokey asides to camera and the “look at me, I’m making a documentary” interjections, but on the whole I was glad she was given the chance to make this film.
She was undoubtedly trying to make the viewer feel guilty. For what? For allowing science to make this test possible? For the health professionals encouraging families to abort abnormal foetuses? For advocating eugenics? For turning every prospective mum to be into Josef Mengele?

Not that there is anything especially wrong with making some us feel a bit guilty, and not that there is anything wrong with questioning the automatic assumption that everyone with a diagnosis “ought to” opt for a termination. But the aspects she didn’t address turned this programme into less of a documentary and more of a personal story. (Not that there is anything intrinsically wrong with that.)
Not all Down’s children are as  ‘high functioning’ as the individuals featured in the film. She was so keen to show us how good the quality of life could be for Down’s children and adults that she didn’t show us the downside. Not all families have the emotional or financial means to cope.

Not everyone could frolic in the garden with uninhibited abandon, splattering each other with paint as Sally Phillips and her children did in the opening scenes. Not everyone can afford ‘help’.

Andrew Billen said that more diplomatically and more succinctly than I have, but there you are.
Posted by sue at 10:35