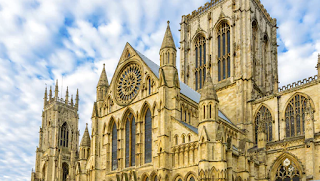 I had the pleasure a few years ago of sitting in the grounds around York Minster and listening, for nigh on an hour, to its bell-ringers practising their magnificent art.

Part of that magnificence comes from the fact that the two Western towers there have more bells than any other cathedral in England - something I learned from this morning's Sunday.

Quite possibly one of those very bell-ringers that magical afternoon was being interviewed by Ed Stourton this morning. The story that unfolded - from him and his dean  - would make for an easy-to-write novel with a guaranteed TV adaptation to follow. The plot so far, simply put, would, I'm sure, be very appealing to TV executives:

Chapter One: A new female dean arrives at an ancient cathedral and tries to professionalise it. One day she summons the cathedral's 30 volunteer bell-ringers to her office, telling them they're sacked and handing them a letter confirming their sacking headed "Our cathedral invites everyone to share God's love". A new band will be formed in the new year, she says, and the bells will ring again for Easter.

Chapter Two: The bells fall silent. The bell-ringers protest. The dean, facing a flood of media attention, stands before the cameras at the cathedral door saying, "I think everyone will acknowledge that ringing bells is something that needs to be done with particular attention to health and safety and security. The law has changed and we have to be compliant". She tells the assembled world media that bell-ringing should be brought "in house". The sacked ringing master, using old-fashioned church terms, is standing in the crowd, along with many of his bell-ring colleagues, and shouts - as the cameras turn swing towards thim - that the dean is "misleading" people and is "ill-formed". The dean, face flushed with anger, strides back into the cathedral, the bell-ringers yelling "Bring back the bells!" as she does. The cathedral door slams shut.

And that's pretty much where we are now (though I may have slightly embroidered Chapter Two), with the female dean appearing on BBC local radio and the ringing master appearing on Radio 4's Sunday.

How will the next chapters proceed?

If it's ITV maybe the dean will be visited by the ghosts of Christmas past, present and future, her heart will melt and the bells will ring out again for Christmas - and (simultaneously) for her marriage to the ringing master. And everyone will live happily ever after.

If it's the BBC, the ringing master will turn out to be a Brexit-backing, UKIP-supporting racist and the dean will turn out to be much nicer than she first seems, her heart being softened by a Giles Fraser-like radical priest. And the bells will ring out again at Easter, complete with a new and fully multicultural band of change-ringers (including several newly-arrived refugees, all with heart-tugging back stories). And - closing shot - the dean and 'Giles' will be shown passionately kissing in the cathedral porch to the sound of bells as the camera pans out to show the cathedral in all its magnificence.
Posted by Craig at 20:23