The Brexit Collection (another update)

Regular readers will know all about Exhibit A when it comes to proving post-referendum BBC anti-Brexit bias: Radio 4's The Brexit Collection.

(We here at ITBB set the ball rolling about it and News-watch then turned the ball into a Brimstone missile. Now MPs and peers are using it to make the BBC answer our concerted charges of anti-Brexit bias).

The collection has now been updated and, frankly, it's only made it appear even worse for the BBC.

But, even worse, they've also added a particularly excruciating example of Radio 4 dramatic agitprop - an afternoon play called Leaving wherein the lead character, a Polish widow, is spat at by racist children and feels she has to leave the country as a result of post-Brexit 'hate'.

(I listened to it today and felt like leaving the country myself as a result, if only to avoid hearing such a mind-meltingly unsubtle BBC radio drama ever again).

The playwright is on Twitter and comes across as a Brexit-hating, Corbyn-supporting far-left activist holding all the opinions you'd expect such a person to hold).

That BBC Radio 4 would rate such a heavily loaded piece as being worthy to appear in its 'crown jewels' Brexit Collection is sadly unsurprising. 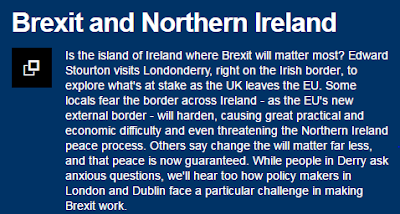 Ed gave us a spread of voices throughout, though the balance wasn't strict and tilted significantly in the usual direction. (I made it 3 for Brexit and 6 against Brexit - and a lot more airtime for the Remain backers).

Plus the chosen 'expert' (Prof. Brendan O'Leary) was obviously very firmly (and passionately) in the Remain camp.

And the closing section (the last seven minutes) was so heavy on the negatives that it rather undid the reassuring effect of the more balanced early parts of the programme.

And the framing figure of the cheery, non-partisan 'Londonderry/Derry tour guide' sounded a sharp note of short-term worry at the end.

So, this Analysis also merits its place in the stark-staringly-madly-anti-Brexit-biased Brexit Collection.
Posted by Craig at 20:03