Torn between Question Time and Newsnight

I tore myself away from the tearful Syrians whose son Omar had just been found not guilty of sexually assaulting a teenage girl in a park, and turned instead to the excitement of Damian Green, Isabel Oakshott, Amol Rajan, Alex Salmond and Emily Thornberry performing before the audience in the RAF Museum in London.

Most of the programme was devoted to Brexit and whether Theresa May should be compelled to publicly reveal her negotiating hand so that various ‘remoaniacs’ could have their say, and possibly their vote,  and Jeremy Corbyn could reflect on it, have a conversation about it, possibly demand another referendum and generally hold the Tories to account.

Emily Thornberry addressed the Leave voters in the audience:  “How many of you voted for your neighbours to lose their jobs?”  That didn’t go down too well. The assumption was that Leave voters ‘didn’t know what they were voting for’ (redundancy for the neighbours course) because that was what will happen when we leave the EU.

This struck me as an example of what Emily Thornberry might call ‘people saying different contradictory things’  since Leave voters (supposedly) objected to unrestricted immigration which drives down wages and steals (our) jobs.

All along, Emily Thornberry emitted a stream of words in her specially adapted version of ‘Just a Minute’, the sole objective being to speak “without hesitation”. (Repetition and deviation were abundant.) Maybe  Q.T. should introduce buzzers.

Isabel Oakshott was good, her hair resting upon her heaving bosom. This infantilising fashion for long hair on adult women is getting irritating.

Emily Thornberry’s media appearances have been so awful since she was anointed Shadow Home Secretary that having her on this particular panel must have been an act of pure mischief on the part of the producers. I expect they were hoping for another Dermot Murnaghan moment.  In the event it was just one long, drawn out exhibition of unintentional self parody.

The audience has become more unpredictable of late. There were a few surprising contributions, not least of which came from a young man with a giant afro, which doubled the impact of his pro Trump sentiment. 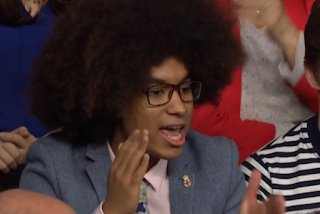 When the programme ended I had the urge to finish watching Katie Razzall’s rose-tinted film. “Did you ever think that this was worse than what you’d left behind?” suggested Katie, in the most one-sided anti-British bit of film I’ve seen for …at least half an hour.

Syria is currently hell on earth and I have sympathy for families like this, but Katie Razzall has managed to portray these particular reality TV stars as such paragons of virtue that this film will have raised the hackles of many more viewers than the filmmakers set out to seduce..

It appears this family had been tortured by the Assad regime before they fled to Jordan, where they’d been living for two years before arriving in the UK.
The suggestion that Omar’s experiences in the UK were far worse than anything they’d experienced in Syria (being tortured) was pushing it. For ‘conservative’ Muslims, whose reputation was one of “high moral standing”, this unfortunate prosecution must indeed have been galling, but let’s not forget - he was acquitted. Found not guilty. British justice and that.

We heard that Omar couldn’t have committed a sexual assault on a schoolgirl because “our religion” doesn’t permit things like that, and although the local council had laid on classes to educate immigrants on how we treat sluts women in the UK,  the classes were for adults only and the father, amusingly named Marwan Badreddin,  (!) said they couldn’t talk about it to youths such as Omar because “We don’t talk about such things in Syria”.

18 year old Omar says he’s never had a sexual relationship. “Here, we see boys and girls kissing all the time and we just have to try and get used to it; in Syria we wait to get married.”

The film included a clip of rampaging skinheads wearing ‘rapefugees’ T-shirts.  Throughout the film certain “complexities” within the tale were alluded to, and introduced, bit by bit.
The family had another son, Abdel Malek, whom they’d left behind in Syria and hadn’t seen for three years. Now it seems they’d just heard he’d been killed while fighting Assad, with “an Islamist group,”  though his father denied that that made him an extremist.

Understandably the family yearned for Syria, but they appeared to have little intention of acquiring any real affinity with the country that had shown them a considerable amount of generosity.
This wilful blindness to the problems created by the cultural and religious differences between Muslim refugees and ordinary British citizens does more harm than good. Katie Razzall’s conspicuously rose-tinted bias added greatly to the confusion.

Later, against my better judgment I saw Katie Hopkins chatting about Donald Trump with a rather irritable Andrew Neil.  Andrew Neil took a disappointingly BBC approach to the subject, while Michael Portillo almost took Katie Hopkins by surprise by unexpectedly siding with her.
Posted by sue at 17:38