Another victim of The Great European Disaster Movie 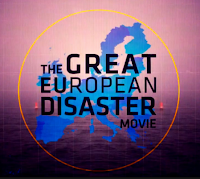 News-watch today brings us an update on a story from much earlier in the year.

The story where we last left it was that Ofcom had appointed Bill Emmott, the ultra-pro-EU co-creator of the biased BBC mockumentary The Great European Disaster Movie, as Chair of Ofcom's Content Board, with responsibility for TV and Radio - an appointment News-watch's David Keighley described as "in effect, appointing a fanatical fox as guardian of the hen house", especially in the lead-up to the EU referendum. David then received a statement from Ofcom (in February) saying:

Any conflicts of interest involving non-executive Board members are managed appropriately and Bill Emmott would not be involved in discussions or decisions related to the EU referendum.

...implying that Ofcom's new head of Content would have to remove himself for all of Ofcom's EU-related Content discussions and thus conceding David's point that Mr Emmott's appointment was problematic and suggesting that Ofcom themselves had little confidence in the man's capacity to behave in an impartial fashion in his new job on matters related to the EU referendum.

Well, it turns out that Mr Emmott is now leaving his new job after being " told by the regulator to step down from part-time role or give up writing". According to the Guardian:

It is understood that Ofcom said that, although Emmott’s role there was part time, he was writing more than they had thought he would and that they were concerned that one of his articles may one day be used as evidence of bias or a conflict of interest in a future court case.

Well fancy that! As David writes today though:

This begs the question of why the hell the Department of Culture sanctioned the appointment in the first place – it was plain as a pikestaff to anyone with access to Google that Emmott’s pro-EU passions were a central driving force in his life.

David wonders if Karen Bradley, the new Culture Secretary, has had a hand in this - which, following Mrs May's forcing-out of the BBC Trust's Rona Fairhead, would certainly be quite something.
Posted by Craig at 19:53