Social media and the BBC (again)

Guido Fawkes had an 'exclusive' this week (as you'll doubtless already know).

According to Guido, Danny Carpenter - a reporter from the BBC's Look North - shared an anti-government Facebook post by Caroline Lucas and added the following highly partisan comment himself, in complete contravention of the BBC's editorial guidelines: 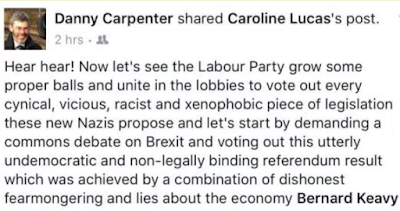 Plus his Facebook page has apparently been deleted and his Twitter feed (which I do understand!) has definitely been deleted, suggesting a quick, embarrassed exit from social media (pursued by the head of the BBC newsroom?)

That Twitter feed of his (Eye of York) wasn't like that Facebook comment at all. His tweets were very 'local BBC TV'. The nearest they came to being controversial is this one (suggesting where he stands on Boris and therefore, possibly, Brexit), which I screengrabbed before his feed vanished: