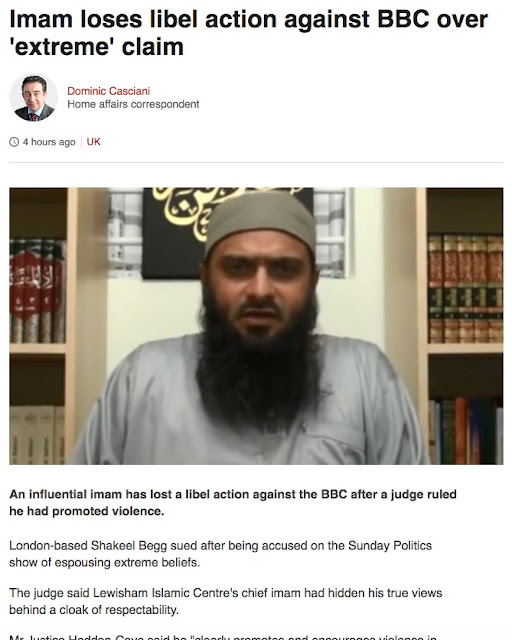 I read about this in the papers, then on Harry’s Place, now here, and here.

'Jekyll and Hyde'
In November 2013, BBC presenter Andrew Neil alleged on the Sunday Politics that the imam had said that jihad was the greatest of deeds.

Jihad typically refers to a personal struggle to do good - but violent extremists use it to refer to fighting holy war.

Despite the imam's protestations during the libel trial, Mr Justice Haddon-Cave said four of his speeches showed he had promoted such violence and two that he had espoused extremist positions.

"Shakeel Begg, is something of a Jekyll and Hyde character," he said.
"He appears to present one face to the general, local and inter-faith community and another to particular Muslim and other receptive audiences. The former face is benign, tolerant and ecumenical.

"The latter face is ideologically extreme and intolerant."

It’s one up for the BBC, good for Andrew Neil, and three cheers for  Mr Justice Haddon-Cave.
Posted by sue at 18:05