The BBC helped in staging Lily Allen's pro-migrant stunt in Calais. It's the kind of thing they do. What they don't tend to do is to dig behind the sob stories and seek the truth. So it's left to the likes of The Mail on Sunday instead to investigate the background to the story which so upset Lily Allen - the story of an Afghan boy who's seeking to join his father in the UK...and this is what they found: 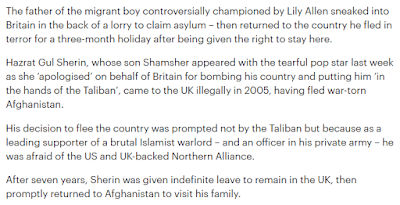 Will the Victoria Derbyshire show update its viewers on Monday? Will Catrin Nye, the BBC reporter who accompanied Lily, ever get round to tweeting something about this (maybe a link to The Mail on Sunday report)?
Posted by Craig at 10:35