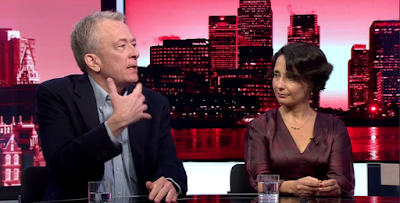 There was an absolutely classic Dateline London today, with a panel drawn entirely from the political left-of-centre.

And the first topic? Brexit and the Tories (with not a single pro-Brexit or pro-Tory guest to be found).

Steve Richards, though praising Mrs May's political skills, said putting Brexit into practise is going to be "a nightmare".

Marc Roche said that Tory ministers "are xenophobic" and talked of a "climate of racism" and "a nasty country" run by "the nasty party".

Eunice Goes talked of "a really nasty atmosphere" being created by "the nasty party" and said that it's "not natural" to be worried about immigration [the one point where Gavin Esler felt the need to demur slightly]. She also said that we are going back to the Europe of the 1930s. [No one mentioned Labour Party antisemitism and political violence at this - or any - point].

Jef McAllister also praised Mrs May's political acumen but said that Brexit is "a mess" and that the government has "no idea" and that "Britain really does need Europe much more than Europe needs Britain" [to vigorous nodding from Steve and Marc]. He then praised open migration before adding, "This pains me".

The Portuguese socialist on the panel, Eunice Goes, said he'd make a "tremendous" secretary general and would put the UN "centre stage" again. The others thought the US election mattered more. Jef McAllister said he hopes Hillary Clinton will win and stop Trump-like "retreats" from international institutions. Marc Roche said that the US needs to use military force in Syria and Europe needs to strengthen its resolve against Putin. Steve Richards said Mr Guterres "sounds great" and hoped he'll find a way through the present "nightmarish situation".

Then it was onto "Trump", and...well, you can easily imagine that discussion for yourselves! (You won't be far wrong).
Posted by Craig at 16:11