As part of this blog's still underused "...and any other matters that take our fancy" remit, I'd just like to give a little praise to a lovely BBC Radio 4 series called Moving Pictures, presented and produced by Cathy FitzGerald (who has a wonderfully dreamy voice).

I don't think I've ever been more actively involved in a Radio 4 programme before, though that's partly because the programme encouraged you to use the incredible (non BBC) resource that is Google Arts & Culture whilst you listened - something which I did which growing fascination because you can zoom in far closer than you'd ever be able to do, even if you were stood in front of the painting itself. It's an astonishing resource - and completely free to use.

I was particularly taken with the painting in the first episode - The Harvesters by Pieter Bruegel the Elder. This is usually what you see on the internet or in books (click everything to enlarge!): 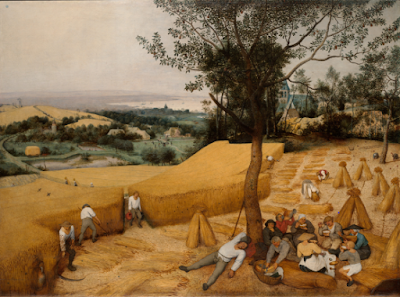 There's so much you don't see, Zoom in closer (much closer) and you see things like this:

...a scene of fruit-thieves being chased by watchmen. Or this: 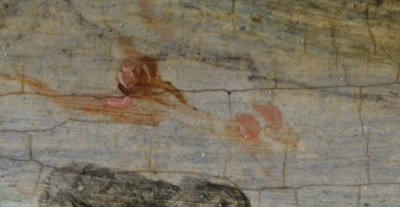 ...a monk (with pink buttocks!) swimming. Or this lovely distant vista: 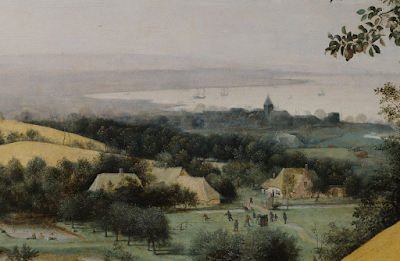 Or this even closer view of the distant cows:

Or the fine brush-strokes of Bruegel's branches: 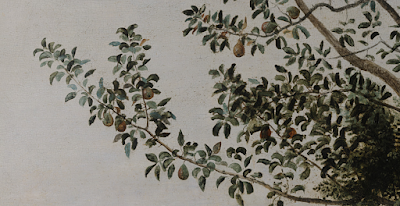 And those are just from the top left-hand corner of the painting.

The second episode looked at a painting that's much less to my taste - Roses, Convolvulus, Poppies, and Other Flowers in an Urn on a Stone Ledge by Rachel Ruysch: 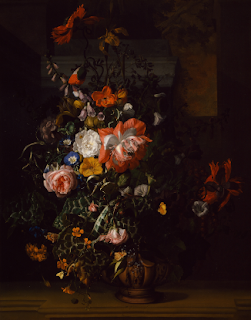 Zoom in though and you see the insects and the effect the insects have had on some of the leaves: 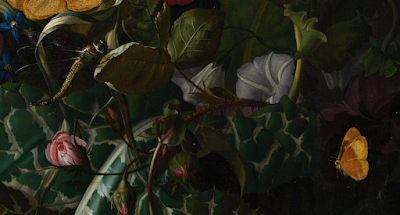 The luminous butterfly on the bottom right there was, to my mind, described correctly as both "cute" and "Disneyfied" (and this is painting from the 1680s). 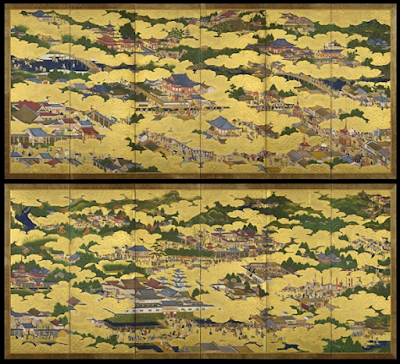 Zooming in here, with the help of Cathy FitzGerald, introduced me to a fascinating world glimpsed through golden clouds. Here, for example, is a rich lady followed by her servants (the rich wearing shoes, the servants walking barefoot: 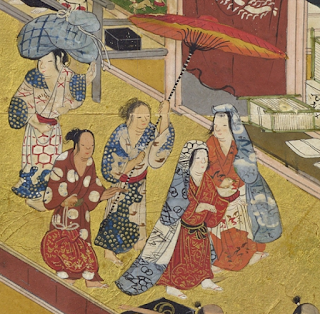 And here come the barbarian Iberians bearing gifts in their silly, outlandish clothes (that so amused the Japanese): 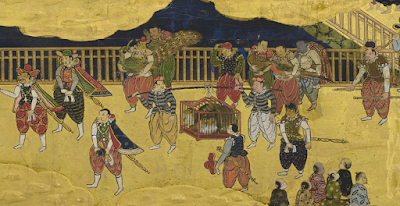 And here is the 'red light district': 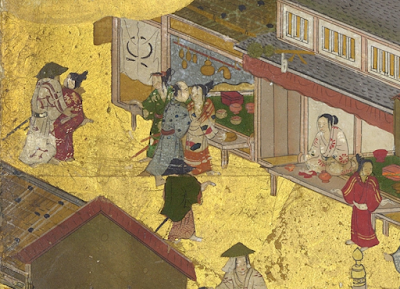 You probably would enjoy exploring these pictures for yourselves. I've gone on to explore others on Google Arts and Culture, and will keep on doing so - thanks to this programme.
Posted by Craig at 07:15