Antisemitism in the UK 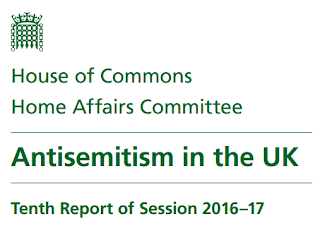 I read a despairing prediction elsewhere that the BBC wouldn't bother to report the Home Affairs Select Committee's report on antisemitism in the UK but, thankfully, this hasn't turned out to be the case and the story is running as the second new story on the BBC website this morning: 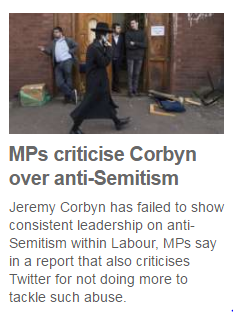 The BBC article sketches out all of the main points in the report - the Committee's criticisms of Jeremy Corbyn and Labour, of Twitter, of Shami Chakrabarti and her report, and of Malia Bouattia of the NUS - and gives rights of reply to all of the people on the receiving end.

As for any criticism that the BBC article has failed to mention 'the elephant in the room' when it comes to discussing the rise in antisemitism in the UK - the rise of a Muslim population that is significantly more antisemitic than other UK population groups - well, that's probably more down to the MPs behind the report than the BBC. The MPs only mention the issue in one section of their report (section 46) and draw no conclusions from it:

46. Polls conducted by the ADL and the CAA indicate that a significantly higher proportion of British Muslims endorse antisemitic statements than the proportion of all Britons. Over a third of British Muslims polled by the CAA agreed with the statement “Jews don’t care about what happens to anyone but their own kind”, compared with 11% of all respondents, and over a quarter agreed with the statement “People hate Jews because of the way Jews behave”, compared with 11% of all respondents. ADL surveys reveal that Muslims worldwide hold more antisemitic views than members of any other religion, but geography has a significant impact: 75% of Muslims in the Middle East and North Africa express antisemitic views, compared with 20% of Muslims in Eastern Europe.

Update: There's an interesting piece at Harry's Place by Sarah AB about the report itself, that's worth a read. Sarah quotes a passage I hadn't read: ‘Labour voters were no more likely than voters from other parties to express antisemitic attitudes, with UKIP voters demonstrating the highest levels of antisemitism’.
Posted by Craig at 10:19