Why can’t the Home Affairs Committee do one of their lip-service game-changing inquiries into antisemitism in the BBC?
After all, the BBC’s conduct parallels the Labour Party’s in many ways.

Just imagine Tim Loughton, Chuka Umunna, David Winnick (if compos mentis at the time) and the gang (perhaps Keith Vaz will be back?) - ensconced in their judicial horseshoe-shaped seating arrangement, gravely and purposefully interrogating Jeremy Bowen, Tony Hall and other appropriate heads of departments, with perhaps a couple of quasi legal advisers passing down notes on little bits of paper.

As Craig has stated, the BBC confounded our (justifiably) low expectations by treating the Home Affairs Committee’s report on Antisemitism in the UK as newsworthy.

In fact the report headlined Radio 4’s early Sunday morning bulletins, but was subsequently relegated to second place behind a rather lame tale of Boris Johnson’s alleged duplicity over Brexit.

The Sunday Programme (Radio 4) didn’t mention the antisemitism inquiry,  but various lacklustre interviews with Tim Loughton (who has replaced Keith Vaz as chair of Home Affairs Committee) were shown on most of the news channels throughout the day. There didn’t appear to be much appetite for analysing or scrutinising the report and I didn’t see any constructive suggestions as to what measures might be taken to rectify the situation. Maybe I missed it.
It now looks as though the media has lost interest altogether.

Superficiality.
The BBC doesn't try to delve beneath the superficiality of the Home Affairs Committee’s hearing or its findings.
Nor, for that matter, have the BBC fully examined Shami Chakrabarti’s mishandling of the enquiry into antisemitism, (and all forms of racism) at any rate in comparison with the tenaciousness with which they’ve pursued other scandals.  They haven’t really exposed the extent to which she discredited herself, firstly, by compromising her independence by joining the Corbynistas before undertaking the enquiry. Secondly, with those oh so shifty responses of hers when asked (by Kirsty Wark) if she’d been offered a peerage (“No, have you?) and (“I’ve been offered peerages many times”) and that shame-faced evasiveness when asked  if an appointment to the shadow cabinet was in the offing.

Andrew Marr conducted a brief interview with Tim Loughton who is dutifully acting as spokesman in the absence of the committee’s incapacitated former chairman.

There are several points in this Home Affairs Committee report that need to be examined more closely, but first, let me go back to the hearing itself, which I blogged at the time, here, here and here.  (Incidentally, in one of those posts I said:

“Next to Ms Chakrabarti in the front row, directly behind Jeremy Corbyn, sat a stern-faced man in a dark suit who Keith Vaz referred to as “Mr. Rotherham.”

At the time of writing I failed to realise that I was / should have been familiar with the gentleman in question, Mr. Rotheram (without the ‘h’) because I had already seen him in BBC 2's enjoyable documentary “Inside the Commons”, where he was followed, alongside Sarah Champion, as a new MP getting to know the ropes. This 4-part documentary is currently being repeated, and it’s worth taking a look to see just how much has changed since it was made. 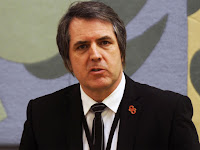 Surveys and stats.
Anyway, from the shocking statistics about antisemitism in the UK, if they are to be believed:


“recent surveys show that as many as one in 20 adults in the UK could be characterised as “clearly antisemitic”.”

Oddly, that figure roughly equates to the number of Muslims in the UK. We assume it isn’t only Muslims or Muslim MPs who’ve been expressing antisemitic and anti-Zionist views, but it does rather imply that, if anything, one in 20 is a gross underestimation. It seems that some degree of antisemitism is indeed almost the norm in the UK.

In fact, the report also quotes figures  given to them by the Community Security Trust, which state that:

I find this confusing.

You can see the complexity of collating evidence of antisemitism. It boils down to “incidents”.
If you bother to look at the CST website you can access a pdf of their reports over individual years. you will find on p9:

“CST classifies as an antisemitic incident any malicious act aimed at Jewish people, organisations or property, where there is evidence that the victim or victims were targeted because they are (or are believed to be) Jewish. Incidents can take several forms, including physical attacks on people or property, verbal or written abuse, or antisemitic leaflets and posters.

None of the BBC’s “structurally antisemitic” reporting would fall into the category of an ‘incident’. That means editorial decisions to show a conflict from one particular perspective more sympathetically than the other (because they consider it morally righteous) wouldn’t count. The same applies to the Labour Party and its leader. When Jeremy Corbyn stands in front of Hezbollah flags while he bellows into a loudspeaker at a Stop The War rally, that wouldn’t count either.

The other statistic, which Paddy O’Connell was so keen to highlight, was that 75% of incidents came from the far-right. Almost as if, for some personal reason, he wanted to exonerate the Corbynistas and the Muslims from charges of antisemitism. Why would he want to do that?

Who knows how the 75% figure was derived. Perhaps it was purely from the recorded number of physical attacks on visibly identifiable Jews, in which case neo-Nazi hooligans would likely be perpetrators rather than those timid keyboard warriors of the left. You know, the ones with acne and cauliflower noses that Andrew Marr says operate from their mothers’ basements.

I was curious. I mean who voluntarily identifies as ‘far-right’ these days? I’d just like to know how all these statistics were gathered and categorised, because to a lay person like myself all those numbers and percentages are virtually meaningless.

Of course the Home Affairs Committee accepted it, so maybe they know something I don’t, but I would tend to question the extrapolations from those figures rather than parrot them unquestioningly. Clarification, you know..

Demonisation of Israel
The sharp increase in antisemitic incidents between 2014 and 2015 is equally striking, which coincides with Operation Protective Edge, mistakenly described in the report as “launched by Israel in 2015”. It was, of course, 2014.

The hatred for Israel that was generated during the both the 2009 ‘Gaza war’ and the more recent “Operation Protective Edge” was exacerbated by, if not positively incited by the BBC’s woefully biased and decontextualised reporting, particularly in its weakness for relaying Palestinian propagandists’ stock-in-trade images of child casualties.

The BBC has some kind of tacit moratorium on reporting the truth about the Palestinian leadership. All one asks for is the truth; not selected stories relayed through the romanticised prisms of ‘gone native’ reporters like Yolande Knell in Ramallah and Lyse Doucet in Gaza.
Organisations like Palestinian Media Watch have started to make a difference in that regard, but there’s a long way to go.

If the BBC were somehow forced to acknowledge their own institutional bias (and rectify it) much of the antisemitism in the UK would fizzle out. It stands to reason, merely because reasonable people dislike terrorism and religious-based violence. If they knew exactly what was happening to Israelis on the proverbial ‘daily basis’ and why it was happening, the public would be equipped to judge.

One-sided reporting is one of the biggest injustices of our times. Even Jeremy Bowen, one of the worst offenders when it comes to demonising Israel, inadvertently admitted such thing during Samira Ahmed’s piece on Newswatch, emphasising the need to give a rounded picture -  albeit about Syria rather than his despised Israel.

“Most of the reporting I’ve done has been from the government side[…] Being with the rebel side is too dangerous.”

“News should not be about goodies versus baddies. […]

An intro gives you a flavour of what’s coming up, and it’s not the whole story. You’ve got to take the whole, and in fact you’ve got to take, probably the whole in more than one piece, because I try and look at the number of pieces that I’ve done from one reporting trip other than from one individual report.

I know that’s difficult because not everyone watches the news with the same obsessive zeal that journalists do but you can’t get everything in in every piece and what I try to do, and for me it’s a challenge of TV reporting particularly.

I do a story, which, for someone who’s interested but doesn’t know much, will ‘get’ and learn something, and will come away, hopefully a bit wiser; and will also hopefully at the same time, have something in it that the top diplomat in the office who deals with in the Middle East will find quite interesting as well, so it needs to be a bit like a layer cake, and you know that is not an easy thing to do.

You need very good material, some of the pictures, and you need to be very careful with your words, and - good interviews, good sound, and you know, sometimes we succeed, and sometimes we don’t.”

Jeremy Bowen sounds quite objective here, doesn't he? He hasn’t got that visceral loathing for one side, as he has when he's dealing with Israelis and Palestinians, although he has appeared rather fond of softly spoken, Israel-hating Bashar al-Assad in the past. My enemy’s enemy?

The Home Affairs Committee could have had a field day with the BBC, but if they did, would the BBC report it?