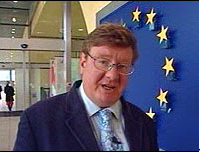 Mark Mardell has long been an admirer of the EU. He could never disguise that fact - or his scepticism about Eurosceptism - even while he was acting as the BBC's Europe editor.

(If you want a reminder of just how far he went in making that clear even at the time then please re-read the remarkable final essay of his old BBC Euroblog from 2009).


Mark Mardell's latest BBC News website blogpost suggests a man whose heart still beats to a Remain tune. It makes the case against Theresa May's strategy of not allowing MPs to keep voting on Brexit between now and Brexit itself.

He presents Mrs May as "High Priestess of Brexit, alone able to divine its deep meaning, jealously protecting the holy aura of the oracle", and says she's treating the referendum result "like a magic sack". MPs feel as if they're being treated like "children" and being forced to "play second fiddle" to the referendum result. It would be "perhaps better" for Mrs May to grant some votes to Parliament, however "messy" they might be, he concludes.

Here's the meat of his argument, using the past arguments of Brexiteers (here John Redwood) against Brexiteers (like Mr Redwood) now:

But the trouble with continually dodging and ducking parliamentary votes is the smell.
For years, those who wanted the UK to leave the European Union trumpeted the inviolable glory of parliamentary sovereignty.
They fulminated against politicians going off to Brussels and doing secret deals behind closed doors, politicians who wouldn't even ask MPs to vote on the agreements they made out of sight and away from scrutiny.
Now, for very understandable reasons, they want to go off to Brussels and do a secret deal behind closed doors and then not allow Parliament to have a say on the result.
It may be good politics, but only the signed-up cheerleaders will politely ignore the whiff of hypocrisy.

He does the same with David Davis later (using his past words to hint that people could change their minds in the future over the Brexit result and that democracy should allow for that):

As David Davis once observed: "If a democracy cannot change its mind, it ceases to be a democracy."

And, as so often with Mark Mardell's blogposts, there's a link that shows him disagreeing with the Daily Mail. Here he uses that link to defend the BBC (and himself) against the charge of being relentlessly negative about Brexit:

It is why any reporting of possible negative effects of the decision must be treated as a combination of lese majeste and an unpatriotic stab in the back by bad losers, not as the way a grown-up media in a grown-up democracy works.

Mark Mardell's blogposts, always so carefully worded and consciously crafted, usually have a message they want to get across, despite the thin veil of impartiality lighted draped across them. That veil was particularly thin here.
Posted by Craig at 07:58