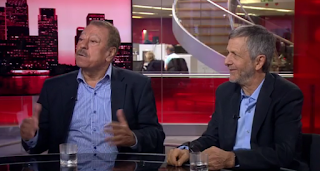 This week's Brexit discussion on Dateline London was like most previous ones where a single pro-Brexit guest is allowed onto the panel (though, often recently, there's not even been one such guest, so this counts as 'good' by Dateline standards).

It's usually been Alexander Deane of late but this week it was the turn of Alexander Nekrassov.

Different Alexander, same result: All the three other anti-Brexit guests and Gavin Esler piling in against him, often all at the same time (a hubbub duly resulting).

Both Alexanders can more than hold their own though, and the result was worth watching.

Gavin (to Ned Temko): And where is Britain in this? I mean, Boris Johnson calling for demonstrations outside the embassy of a country with whom we're not actually in conflict was a very odd thing to happen, wasn't it?......Ned (to Gavin Esler): How surprising that Boris should say something odd!.....(Laughter).

Gavin (to Alexander Nekrassov, after AN called for a 'million man march' for Brexit): Well Boris Johnson's called for one demonstration and you're calling for another! I think he got one protester. Let's see if you can get more! 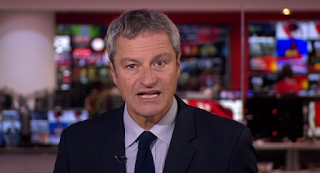 
Has Brexit become what one MP this week described as 'a dog's Brexit' - a hugely costly mess - because those who most strongly advocate it haven't actually figured out how to make it work?

Yet another negative take on Brexit from the BBC.


And here are Gavin's other Brexit-related contributions today. Taken as a whole, they fall almost entirely on the anti-Brexit side of the argument (as you will see). Does that make him biased?:

(Secondary introduction): The advertising for a British favourite spread called Marmite says 'You either love it or hate it'. The same could be said for Brexit, which this week is being blamed for the rising cost of...Marmite. And for Parliament being refused a real say in the most important political decision of our lifetime. Is Brexit being botched?

(to anti-Brexit Ned Temko): I talked to Herman van Rompuy this week, the former EU president of the council, and he said that 'You have to understand that this is not a top priority for the French government, the German government', and he went through the governments. 'It may be your big deal but it's not ours, and it will be terrible'. He suggested it will be really, really difficult. Now, that was a view, but an important view.

(to anti-Brexit Abdul Bari Atwan): But what's really struck me about this week was Parliament attempting to reassert itself. I mean, we are governed by the Queen in Parliament. It's very, very clear what that's supposed to mean...except we've also got the will of the British people absolutely clear we want to get out of the EU....what's not clear is what that would look like and is there a mandate, for example, for leaving the Single Market. That is the question that MPs have been....

(to pro-Brexit Alexander Nekrassov): Well Boris Johnson's called for one demonstration and you're calling for another! I think he got one protester. Let's see if we can get more! 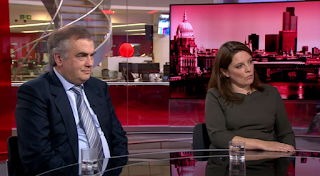 (to Ned Temko): But also on the specific point of Parliament. You know, it's very difficult to overturn several hundred years of British history in which Parliament effectively scrutinises the executive...well, we will see, won't we?

(interrupting Alexander Nekrassov): Well, there are a lot of cars that are made in Germany, I can tell you that!

(to Alexander Nekrassov): Well, we don't buy Chinese wine, that's all I can say!