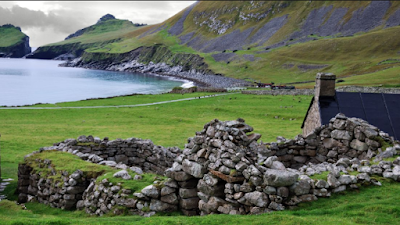 That feeling of drowning in a tsunami of BBC anti-Brexit bias swept over me again as I was listening to this month's From Our Home Correspondent on Radio 4. The programme's website pre-announced one of the features like this:

Torcuil Crichton looks at the issues raised by Brexit from the perspective of those living and working in his native Western Isles.

It was a foregone conclusion really. Of course it was negative. This is BBC Radio 4. Nothing else should ever have been expected.

Torcuil Crichton of the Daily Record, one of the programme's guest correspondents, talked of "Brexit storms", "this Brexit storm" and our "Brexit quandary". (At least he didn't call it what he's called it on Twitter, a "nightmare").

He also talked of all the good things the EU had done for the Western Isles and explained how the EU wasn't to blame for any of the bad things that have happened there:

Over 40 years the Hebrides have been transformed by large tranches of European funding for everything from crofting to causeways to community businesses. In this part of Brexit Britain they will genuinely mourn the loss.

Islanders don't blame the Spaniards or the EU for decimate fish stocks. We know it was east coast trawlers who scooped out the herring and everything else years before a common fisheries policy was even thought of.

His lament ended on this glum note:


Although the water was so still that we were able to see the ocean floor we found on our little boat that we could not plumb the depths of Scotland's or Britain's Brexit quandary. And who can?

Still, at least it wasn't just Brexiteers who might have found this biased. The cybernats might well have raised a grim eyebrow too at this emphatically unionist-sounding take on matters:

Some (Scottish fisherman) would prefer fishing to the a UK-wide policy, as if they don't trust it in the hands of their own parliament. Scotland, you see, is not one uniform national identity but many cultures. These differences, these divisions, will surface again if - as she threatens to - First Minister Nicola Sturgeon presses for a second independence referendum during this Brexit storm.

Why is it no surprise that this feature came from an anti-Brexit, anti-Scottish independence reporter? Will the bias ever go the other way on From Our Home Correspondent? (I very much doubt it).
Posted by Craig at 18:42

Labels: 'From Our Home Correspondent'