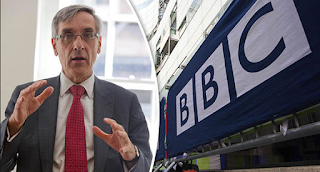 Here's something from John Redwood MP which chimes with some of our recent posts:

The BBC seem caught in a time warp. So often their idea of news is based on reheating old Remain stories and lines from the referendum debate. We have had to go back through the debate about early recession, late recession, property crash, loss of tax revenue and the rest that were exhaustively discussed during the referendum period itself. They still seem unable to grasp that there is no such thing as the Single Market detached from the full panoply of EU laws and policies which a state can belong to, nor that the debate is only about access to each other’s markets which should be relatively straightforward.

It starts early with Farming Today. That programme endlessly reviews Brexit despite there being no news as there are still no formal negotiations to report. The Today programme allows some positive economic news on, but even this is completely distorted by seeing it all through Brexit glasses. For example, when Burberry reported their figures the Today programme “expert” and the guest expert were unable to explain why the market had not responded more positively to the great news that Burberry’s UK sales were up 30% in the last quarter. It never occurred to them that Burberry is a global brand and sales elsewhere were disappointing, and the global licensing revenue is tailing off. When commenting on movements in sterling or interest rates it is usually seen through Brexit glasses, as if these things never moved before we decided to leave the EU!

The main driver of UK interest rates and sterling is often the policy of the Fed and US government, just as that is the main driver of moves in the Euro, yen and emerging market currencies. Markets are fixated by changes in Fed language on rate rises. In recent days bond yields have been going up both sides of the Atlantic and both sides of the Channel, and this has nothing to do with Brexit.

Can we have some commonsense and better based reporting, so listeners and viewers can be given a better understanding of what is going on in the world around them? The latest Chinese GDP figures, the oil price and the impact of the US election are all more significant to markets than the UK’s departure from the EU.