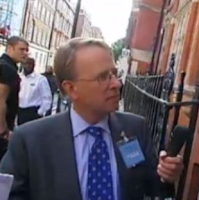 Alan at Biased BBC....(in a piece headlined 'BBC Stalinists grind out the propaganda' - something which might well win Seumas Milne and the Corbynistas back to the BBC again!)....gives the BBC a good right hook over this morning's Broadcasting House and its treatment of UKIP:

This morning on R4’s Broadcasting House we heard another addition to the BBC’s long sneer (28 mins) at UKIP as it again tried to paint it as racist and an irrelevant rabble.  We were told we’d have a quick run down of UKIP background but you’d have little idea that this has been a highly successful party that has brought the Liberal Establishment to a heightened state of panic, not only as it disembowels Labour and scoops up its supporters with 4 million voters, but has also been the driving force behind one of the most momentous events in British political history…Brexit of course.  The BBC preferred to mock and ‘Trumpify’ it by suggesting it is packed with violent, sexist, probably racist, back-stabbing people who have no interest in ‘ideology’.  They dragged in Michael Crick to do a little hatchet job….apparently UKIP is the worst of the worst…no other political party has any of its problems or attitudes.  The presenter finished off of course with a suggestion that the ‘tone’ of UKIP was a bit nasty…..again based upon what?

That final comment from the presenter (Paddy O'Connell) was an evidently pre-prepared closing question to UKIP donor Ko Barclay:

Michael Crick (that old basher of the political Right) was audibly dripping with salaciousness over UKIP's goings-on. He said that UKIP people are forever bombarding him with "incredibly juicy" gossip about each other - sexual, political but rarely ideological - and that he's even thought of writing a book about UKIP called Beer, Blood and Semen.

He did, however, also say:

It seems to me that the potential for UKIP right now is massive. Those millions of people who regard themselves as left out, who are badly paid (the people who Theresa May was talking about last week), the people in northern England who traditionally used to vote Labour, are worried about immigration and low-paid jobs and things like that...With Labour moving to the Left and having this air of being a metropolitan socialist party under Jeremy Corbyn and the other figures, many of whom in the shadow cabinet are London MPs, the potential for UKIP is massive right now. They could do to Labour in northern England what the SNP did to Labour in Scotland. But to do that does require a pretty well-organised party and a leader, and they don't seem to have a leader anything like as good as Farage. But even a leader half as good as Farage, who could hold the party together and march into the Labour heartlands, would be a very significant factor in British politics.