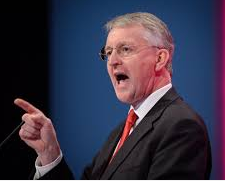 And, if the BBC is still persisting with the line about judging a programme over time, let's now go back another day (to Thursday's Today) - though this edition has little on Brexit.

At 6.22 Dominic O'Connell interviews Mike Amey from PimCo. [I'm not sure of his views on Brexit, either before or after hearing him]. Dominic asks:

We've had more conflicting evidence about the health of the economy post the Brexit vote yesterday with Travis Perkins and Foxtons - two companies heavily exposed to the real estate and property markets - reporting quite bad results. Other signs the housing market seems to be in good health. What are we to make of all this?

That (going back in time) is the first glimpse of a bit of even half-balance in three editions of Today.

However at 7.24 came the only other Brexit-related feature:

Hilary Benn, of course, is a keen Remainer and used the opportunity to praise the Single Market and say that Parliament should have the final say on any Brexit deal. He made other Remainer talking points too.

So, going back in time from today, that's three consecutive editions of Today with no pro-Brexit voices but plenty of pro-Remain voices.