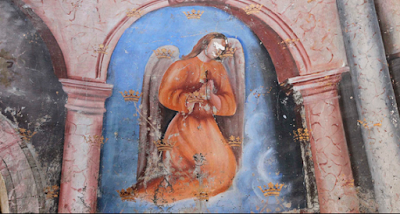 After having just written a piece about how I feel that the BBC has focused almost exclusively on the suffering of the anti-Assad, rebel side in the Syrian Civil War (Jeremy Bowen excepted), I tuned into this morning's Sunday on Radio 4 to have my expectations confounded. Ed Stourton talked to someone who works to counter the suffering of people on the other side of the conflict - namely Catholic Armenian nun Sister Annie Demerjian, who helps the sick and elderly in government-held areas.

Ed, on introducing her, said she "does relief work in Aleppo - western Aleppo that is, not the eastern part of the city which is held by the rebels." He didn't spell out why a Catholic nun wouldn't be helping in (Islamist) rebel-held eastern Aleppo, but it's not hard to guess. Nor did he spell out why a Catholic nun would be able to go about her work in (secularist) regime-controlled western Aleppo, but we can easily guess that too.

She talked of the dangers from "shells and bombs", "rockets, bombs and shells" and I presumed these came from the rebel side.

The programme's website, however, rather curiously, talks about "airstrikes" (presumably meaning Russian and Syrian regime airstrikes).

She actually never mentioned airstrikes - presumably because government-held western Aleppo isn't targeted by the Russians or the Syrian government. So why put that on the Sunday website?

Could it be that the people at Sunday are so used to reporting just one side of this war that they automatically assumed that Sister Annie and the people she's helping would be in danger from the Russians and the Syrian regime rather than from the rebels?
Posted by Craig at 20:22