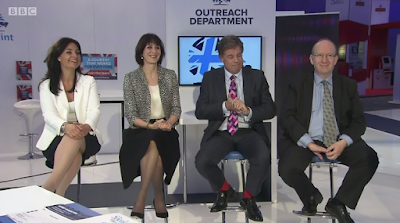 The closing discussion on last night's Newsnight - which discussed Mrs May, the Tories and Brexit - drew the following pair of tweets from Tim Montgomerie:

The Daily Express has an article about it with the headline:

The main interview of the programme, however, was with David Gauke MP, another Remain-backer, and Evan Davis spent quite a bit of time discussing Brexit with him too, asking him (anti-Brexit) questions like:

These are brave face word you're putting on. Can you think of another act that a government has taken that would make us permanently 4% poorer - a single action other than going to a world war?

That doesn't sound very impartial to me either.
Posted by Craig at 06:53