The Countryfile Calendar: I demand a second referendum

In the 'other random stuff' category, here's something I wrote some five weeks ago as BBC One's Countryfile launched its annual Countryfile Calendar competition: 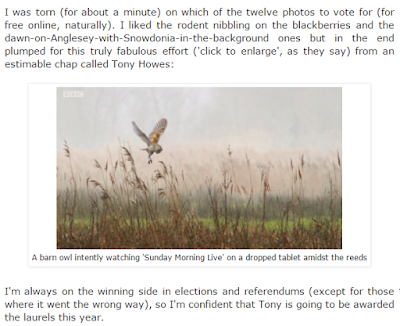 Well, Sunday night's Countryfile revealed the results and it was "the rodent nibbling on the blackberries" that won it with the public (an adorable photo of a water vole by Dean Mason): 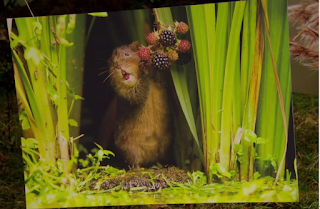 Like Patience Wheatcroft, I believe that the judges' decision is correct and should stand and that Parliament (including the House of Lords) should have the right to overturn the "populist" water vole result.

The BBC's John Simpson, speaking at a conference in Costa Rica, said that Countryfile should have given Countryfile viewers clear guidance that Tony Howes's barn owl photo was factually the better image and that, if the BBC had done that, the outcome would have been a bit different.

Paul Johnson of the IFS said that Countryfile should have been "brave" and declared in favour of Tony's fabulous photo.

Mark Thompson, former DG of the BBC, described John, Simon and Deborah as "eminent" (as they undoubtedly are) and compared those advocating in favour of the water vole image to "Coco the Clown".

Roy Greenslade and Timothy Garton Ash accused the BBC of pandering to "populism" and "false balance".

(Sir) Craig Oliver said, in his new book, that David Cameron had lobbied the BBC to make John, Simon and Deborah's expert view public in advance of the vote - or, as he put it, for the BBC to "stamp their own independent authority and analysis on the output".

Alas, yet again, all of this came to naught...

The British public has spoken. The blackberry-nibbling rodent has won. The pound has plummeted and Kamal Ahmed of the BBC has a long face. Evan Davis is spitting barn owl feathers. Gary Younge on Radio 4 is seeking out disgruntled European barn owls. Lord Gus O'Donnell, also on Radio 4, is speaking only to Dean Mason's friends. Emma Jayne Kirby is starting a year-long series focusing on a river bank in the North-East where stupid, racist water voles are moaning about nice, football-playing mink asylum seekers. Mary Beard is acting the role of Senna the Soothsayer in a remake of Up Pompeii. David Aaronovich, on The Briefing Room, is claiming that supporters of the water vole photo are obviously in favour of the death penalty and flogging, and The Food Programme is predicting riot and famine as a result of the Countryfile vote.

I say: Let Parliament decide!
Posted by Craig at 21:08