Complaints from both sides (again) 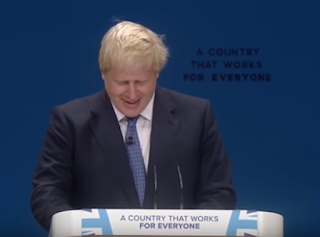 The BBC must be happy today.

Yesterday came Boris at the Conservative Party conference saying (accurately) that the BBC is sometimes "shamelessly anti-Brexit" before adding (doubtless to the BBC's delight), "I think the Beeb is the single greatest and most effective ambassador for our culture and our values".

Today in strode (Sir) Craig Oliver in The Times saying that David Cameron had pressured the BBC in the other direction for “mistaking balance for being impartial", demanding that "BBC editors should have been stamping their own independent authority and analysis on the output" (thus echoing the BBC's very own John Simpson).

Inevitably, in response, in rides the BBC - bugles blaring, banners raised high - crying out its favourite mantra: "We're getting complaints from both sides; ergo, we must be getting it about right!"...

...and Politics Home quotes a BBC source as saying that very thing:


There’s nothing new in people having strong views about our coverage, but the public will notice a distinct irony in the BBC being accused of failing to do enough to stop Brexit on the one hand while being criticised for being anti-Brexit on the other. As we’ve said before, our job is to challenge politicians from all sides and interrogate the arguments. That’s what we’ve been doing and what we’ll continue to do.

Where the BBC's 'complaints from both sides' argument falls down (as so often) is that anyone claiming that the BBC has been either balanced or impartial over Brexit since the referendum result is arguing from a very sticky wicket. (To put it poetically, in the manner of Sir Andrew Motion, "The evidence is strong/That they are wrong".) The BBC has had a heavy anti-Brexit bias since June 23 (as demonstrated by Radio 4's Brexit Collection, for example).

And, despite the bias being not as severe before the referendum result, the bias even then still ran overwhelmingly against one side (the same side) - as (hopefully) both Is the BBC biased? and News-watch demonstrated (in considerable detail, and despite honourable exceptions).

Boris was right. The BBC is sometimes shamelessly anti-Brexit.

The campaign from the likes of John Simpson, Mark Thompson, Chris Patten, Paul Johnson of the IFS, Roy Greenslade, Timothy Garton Ash, (Sir) Craig Oliver and David Cameron, etc, however, for the BBC to become even more biased in their direction goes on and is evidently gathering pace. And they are probably knocking at an open door.
Posted by Craig at 18:28