A difference of interpretation 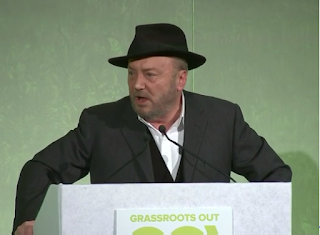 Grassroots Out (GO!) received coverage from both of the BBC's nightly current affairs staples - The World Tonight on Radio 4 and Newsnight on BBC Two.

Intriguingly Paul Moss for Radio 4 didn't even mention George Galloway, whereas Newsnight's very own GG, Gabriel Gatehouse, not only began his report with the row over the Gorgeous One but also went back to it later on.

(In other words, one reporter made it the main pivot of his report while the other reporter ignored it completely.)

That's not the only difference.

Here's The World Tonight's Paul Moss, pointing out the diversity of the speakers:

Grassroots Out were keen to show off their diverse membership. Speakers included the owner of a small manufacturing company and a London black cab driver who told the audience Uber was killing his trade and that the EU had facilitated this.

And (accompanied by images of Peter Bone and Bill Cash), here's Gabriel Gatehouse on Newsnight doing the opposite:

The problem for Grassroots Out is that it isn't really a grassroots movement. Not yet anyway. It's only a month old, it's got only about 5,000 followers on Twitter, and most of tonight's speakers are familiar faces from inside what they themselves dismiss as 'the Westminster Bubble'.

I suspect Grassroots Out supporters would have been happier with Paul Moss's reporting here.
Posted by Craig at 10:44