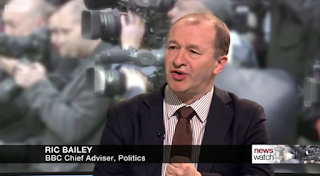 The difference between BBC TV's Newswatch (with Samira Ahmed) and BBC Radio's Feedback (with Roger Bolton) continues to be striking. The former does the BBC some credit, the latter less so.

This week's Newswatch saw a senior BBC News editor (Hilary O'Neill, deputy editor at BBC News at Ten) go head to head with a disgruntled BBC viewer over BBC One's coverage of David Cameron's post-deal press conference. Samira Ahmed took the viewer's side, made the BBC editor sweat a bit and forced her to concede that a mistake probably had been made over not mentioning that viewers could watch a live feed of what Mr Cameron was saying elsewhere.

The previous week's Newswatch gave us an interview with Ric Bailey, the BBC's chief advisor on politics, on covering the EU referendum. Samira gave us a couple of contrasting viewer complaints about BBC bias before the interview ('complaints from both sides') but made it clear that that those complaining that the BBC was biased in favour of the EU were "the majority".

Contrast that with this week's Feedback on Radio 4. This also featured 'complaints from both sides', but presenter Roger Bolton didn't give any indication of which side was in the majority. And it also featured Ric Bailey, the BBC's chief advisor on politics. He wasn't really made to sweat though.

Indeed, Roger Bolton - the supposed voice of the Radio 4 viewer - once again acted as the BBC's voice here. (The contrast with Samira Ahmed could hardly have been stronger.)

He began by saying:

Hello. A former chairman of the BBC said that. 'The nation divided always has the BBC on the rack.' Well, the country is certainly divided about this. So in Feedback this week, I'll ask the corporation's chief political advisor Ric Bailey what it's like being on the rack as agitated listeners and In and Out campaigners tighten the screws.

And then gave us a clip from the coming interview of Mr Bailey saying:

If we're not doing it in exactly the way they want they will complain loud and clear.

And the close of the interview brought more of the same:

Our thanks to the man on the bed of nails - the BBC's chief political advisor, Ric Bailey.

Worst of all though was this:

We begin with the much-anticipated announcement of a referendum on whether the UK should remain part of the European Union. And some listeners are already lining up to shoot the messenger.

How dismissive of listeners' concerns about bias is that!

Roger Bolton is far more opinionated that Samira Ahmed on their respective 'news watch' programmes. That's par for the course for him. He used his Radio 4 programme to make his own views on the government's pre-Charter Renewal deal with the BBC very plain last year, and something of that seemed to resurface in this question to Ric Bailey:

What's also going on is that politicians from both sides are pressurising you. I mean, I noticed earlier that the Secretary of State, Culture Secretary John Whittingdale, who happens to be in favour of Brexit, did said that he and others would be watching the BBC very closely. We've heard those sort of remarks before.

Alas, the days of Chris Dunkley - when Feedback had more bite - have long gone. It's Roger Bolton pushing his views on 'Our Beeb' now and forever more.
Posted by Craig at 07:18