Sunday morning. 7.15. Switched on BBC Breakfast, and they are promoting a Muslim Council of Britain initiative.

Today (Sunday) more than 90 of the UK's estimated 1,750 mosques are opening to doors to non-Muslims to allow Muslims to "explain their faith beyond the hostile headlines".

"I think it's a great initiative", says Christian to a polite chap from Khizra Mosque, Manchester, thus giving it his seal of approval.

He later asks: "We've got to touch on a difficult issue: Islamophobia, the attacks on Muslims since Paris has been rising. Is it partly a reaction to that?"

Is it too much to hope that the BBC Style Guide will advise against the use of the term 'Islamophobia' soon? After all, as Lord Hall didn't want the BBC to seem to be using "pejorative" terms like 'DA'ESH', as...

Unfortunately this term may give the impression of support for those who coined it and that would not preserve the BBC's impartiality.

...then surely using the deeply tendentious term "Islamophobia" isn't preserving the BBC's impartiality either, is it?

Maybe saying "so-called Islamophobia" would be a BBC-worthy compromise?

This story is also on the BBC News website homepage. It has more than one link to the Muslim Council of Britain website, and the following 'further reading' recommendations: 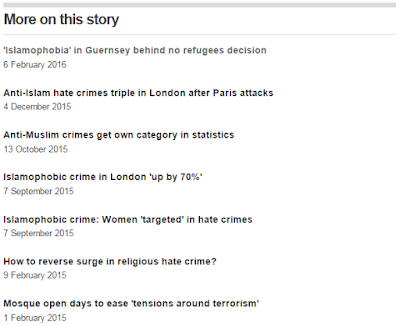