If you were wondering where Evan Davis is today (and why wouldn't you be?), well he's in Paris at a conference for UK school children (sixth formers) called Your Future in Europe.

(I stumbled across this by accident, so, no, I'm not stalking Evan!) 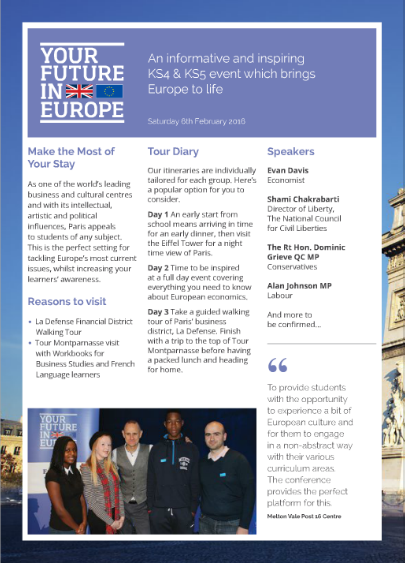 I was especially struck by the list of speakers for the conference.

They all have something in common: Mr Johnson is leading Labour's pro-EU campaign, Mr Grieve is among the most pro-EU of Conservative MPs and Shami Chakrabarti turns out to be pro-EU too (surprise, surprise!)

I was curious about that 'And more to be confirmed' though, as it suggested there might be some balancing pro-Leave politicians too...

...but here's a photo (recently tweeted) showing the full panel for the conference's Question Time: 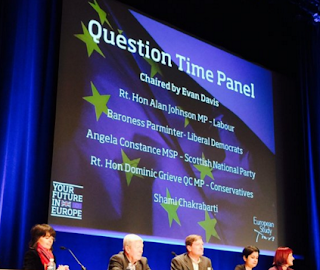 ...and the SNP's Angela Constance, whose views I don't know but can guess, given that the SNP is presently fiercely pro-EU, so she'll doubtless be too.

So that's an entirely pro-EU panel then.

Now, what take on the EU referendum might the near-voting-age British school kids get from this entirely pro-EU panel? I think we can guess that too.

...it's interesting, isn't it, that Evan Davis is there, chairing the interestingly-titled Your Future in Europe - as he apparently does every year?

From what I can gather on Twitter, he also gives the opening talk and answers questions about the EU from the children. Wonder what he tells them?

Returning to official BBC matters in the light of all this: How many episodes of the BBC's own Question Time will have an overwhelmingly (or entirely) pro-EU panel over the next few months?

I bet someone will be counting.

Update: Participants on Twitter confirm that this very one-sided Parisian Question Time, chaired by Evan Davis, was focused specifically on the UK's membership of the EU.

The Twitter feed for one of the participating schools says it all really: 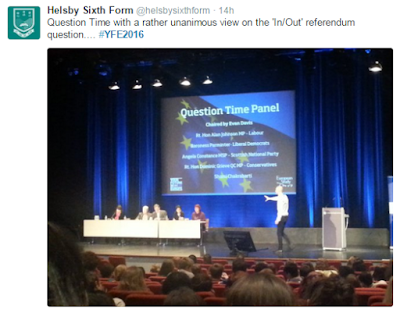