"Vote to leave the EU and woe betide Northern Ireland!
Or so Ed Stourton led us to fear tonight".


I'm sure I read that somewhere recently, though for the life of me I can't  think where!

Is it true though?

Last night's Analysis on Radio 4, presented by Edwards Stourton, looked at the Irish view of Brexit, from both sides of the border: 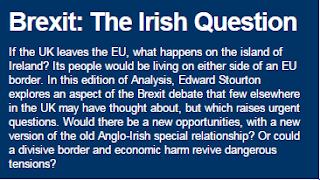 The first section (the first 15 minutes) dwelt on the possible negative consequences of the closing of the presently 'open' border. The second section (some two and a half minutes) dwelt on the possible negative economic consequences of a Brexit, especially for Northern Irish farmers. The third section (around four minutes) dwelt on possible harm to the peace process from a Brexit. The fourth section (two minutes) looked at the position of Irish passport holders in the UK, some 500,000 of whom will be able to vote in the referendum. The fifth section (a couple of minutes or so) looked at the damaging uncertainty a Brexit might cause. And the final section (two minutes) looked at how the UK might fracture constitutionally as a result of a Brexit.

Now, I have to admit that when I first listened to the programme (last night), these potential threats from to a Brexit did start to worry me. I hadn't really thought of them before and, cumulatively, they added up to 'five reasons to vote 'Remain' in the EU referendum'.

We heard them put by a range of people - two local business leaders, three local community leaders, a Sinn Fein politician, an Irish Times journalist, the Irish ambassador to the UK and an academic.

Against these eight people on the anti-Leave side were set two pro-Leave voices, both politicians - Nigel Dodds and Kate Hoey. Adding up the amounts of time devoted to their point of view, I make it just under 8 minutes for Nigel Dodds and Kate Hoey in a programme that lasted nearly 28 minutes. Much of the rest of the programme was devoted to those arguing against a Brexit.

Besides the differing amounts of time each side's concerns received, another difference between the their treatment was that Edward Stourton challenged Nigel Dodds and Kate Hoey significantly more than he did the other side of the argument (which ate into 'their time' even more).

To show all this in action, here are my notes. (Apologies for any spelling mistakes, especially of names, and for its sketchiness).

They include quite a few direct quotes (all in quotation marks!), including some from Ed Stourton himself. The one that struck me as most worthy of note was this one:

But shared British and Irish membership of the EU does give the people of Northern Ireland a choice of a new and perhaps less contentious way of approaching the issue of identity."

0.00 Narrative.
1.00 Colin Paterson, a Newry enterprise agency head, recalls the "hard border". He calls it "really tough".
1.54 Thomas McAvoy, Lough Country Council, praises the open border and the stability (from a Republic of Ireland perspective).
2.35 Narrative.
3.42 Nigel Dodds. DUP criticises the costs of EU and wants control of our borders.
4.14 Question.
4.19 Nigel Dodds.
4.40 Narrative.
5.09 Bernard Boyle, local community activist. Ed: "Are you anxious about the referendum?" Mr Boyle: "Yes, very much so". He talks of the disruption of the last land border. "We don't want to see it again". Ed does poses one devil's advocate Eurosceptic question.
7.23 Narrative.
7.35 Magella Murphy, women's group, says "It would be a shame if we end up with the border again".
8.41 Narrative.
8.48 Patrick Smith, Irish Times, says "I fear that a British departure from the EU would lead to the re-imposition of border controls...and that's a real horror".
9.35 Narrative.
9.55 Dan Mulhall, Irish ambassador to London, says "We don't know what the future may bring..." "Anything that divides those two countries..has to be a negative thing, from our point of view". "It's also negative from the point of view of the British economy".
11.23 Nigel Dodds, DUP, criticises Enda Kenny.
11.38 Narrative.
11.46 Nigel Dodds, talks of "exaggerated" fears about border problems.
12.29 Question from Ed to Nigel Dodds: "You're REALLY confident about that are you?....That border could become a hard border, couldn't it?"
12.46 Nigel Dodds, recalls the decades-old common travel area within the British Isles.
13.09 Question from Ed to Nigel Dodds: "The trouble with that is that Britain in the circumstances of voting to leave wouldn't be negotiating with Dublin. It would be negotiating with the EU as a whole...(etc)"
13.39 Nigel Dodds, says it's in the EU's interests to be sensible.
13.55 Narrative.
14.14 Kate Hoey, Labour, says border controls might help counter crime and terrorism and that we'd still cooperate with the Irish Republic.
15.04 Narrative. Farming subsidies? Peace subsidies?
15.33 Martina Anderson, Sinn Fein. Her constituency is a net beneficiary of EU funding, she says. It will lose over £3.5 billion if there's a Brexit.
16.18 Kate Hoey, says the UK treasury might pay them instead.
16.47 Question from Ed to Kate Hoey: "Separate to that, a lot of farmers in Northern Ireland who do very well out of the EU too."
16.51 Kate Hoey, replies that farmers would get money from leaving the EU.
17.28 Narrative.
17.38 Narrative. Would Brexit undermine the peace process? Ed: "But shared British and Irish membership of the EU DOES give the people of Northern Ireland a choice of a new and perhaps less contentious way of approaching the issue of identity."
18.02 Dan Mulhall, Irish ambassador to London. Brexit would cause "dislocation and uncertainty". Would disrupt progress on last 30 years, he says.
18.46 Narrative.
18.55 Nigel Dodds. calls this "scaremongering".
19.29 Narrative.
19.51 Martina Anderson, SF, says there would be an EU border right in the middle of Ireland.
20.14 Question from Ed to Martina Anderson: Would there be a separate referendum, like the Scots might have, if there's a Brexit?
20.27 Martina Anderson, SF, replies The days of "Mother England wagging its finger" are over.
21.10 Nigel Dodds, replies that we are part of the UK, so there's no need for a separate referendum.
21.21 Narrative. A "wildcard": Irish passport holders in UK, will be able to vote. 500,000, "plus people of Irish descent" (as Mr Mulhall puts it)
21.55 Dan Mulhall, Irish ambassador to London. See above.
23.12 Narrative. The referendum is causing uncertainty.
23.29 Pamela Arthurs, East Border Region Organisation, talks about this uncertainty, saying "It's an unknown that we are quite frankly disturbed about".
24.04 Narrative. The Irish question may be entering Cameron's "radar", Parliamentary exchange with a nationalist MP and David Cameron.
25.23 Narrative. Constitutional changes across UK. Ed: "But this referendum could reopen questions that seemed settled".
25.56 Dr Jo Hunt, Cardiff University. If England and Wales vote one way and Scotland and N Ireland the other, "that could leave us in a very difficult constitutional situation". Another Scottish referendum, possibly. SF would demand a referendum too. "This is far more than just a question about our remaining in the European Union. It's about our constitutional future," she says
27.24 Narrative. Ed's closing words: "In this referendum local views could have an impact right across the United Kingdom in ways we've hardly begun to think about".
27.31 End.
Posted by Craig at 22:33