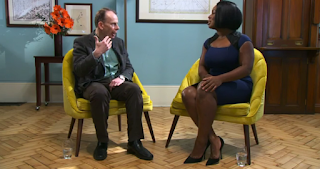 Ah, those who complain that the BBC is obsessing about Westminster Bubble gossip about personalities and party splits - rather than focusing on the important issues surrounding our membership (or otherwise) of the EU - will doubtless have groaned loudly at Andrew Marr's opening words today, promising an even-handed focus on Tory splits and Labour splits:

The knives are out and flashing. Leading Tories who want us out of the European Union are now in no doubt about the Prime Minister's anger. He thumped Boris in the Commons and Michael Gove has been warned off. Are the Outers up for the fight? I'm joined today by Iain Duncan Smith. On the EU he's one of David Cameron's sternest cabinet critics. But we mustn't think of this as purely a Tory story. Angela Eagle, one of Jeremy Corbyn's big hitters, is strongly pro-EU. Can she really claim, however, the same for her leader?

And those who think the BBC is Trumpophobic might also have groaned at what came next - a clip from the forthcoming interview with American actress Uzo Aduba (of the 'hip' Orange Is the New Black fame) where Andrew Marr asks her what she thinks of Donald Trump and she laughs uproariously.

The full question turned out to be:

You're an American. We're very, very pleased to have you here in London. When you go back home are you going to be happy with Donald Trump as your next president?

After her laughter subsided she said she's "in deep support for" Hillary Clinton. (Surprise, surprise!)


Update: In fairness though, the interviews with Iain Duncan Smith and Angela Eagle did focus heavily on substance instead of Westminster Bubble-related goings-on. They were much more interesting as a result.
Posted by Craig at 12:42