Warning: This post contains almost as few funny, clever jokes as Will Self's From Fact to Fiction tonight. 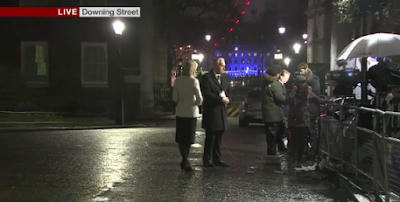 Here's a cautionary tale for anyone who fancies monitoring the BBC News Channel to see if it's providing balanced coverage of the EU referendum debate.

I read a comment somewhere today saying that, having just watched the 1pm News on the BBC News Channel for 30 minutes, there hadn't been a single representative of the Leave camp asked to comment. Someone from the Remain campaign had appeared though, and there had been extracts from the PM's speech and a Jeremy Corbyn interview. The comment said, "Frankly I couldn't believe it, not even from the BBC".

As I wrote this morning, I tried something along these lines over a 4-hour period on Wednesday afternoon's BBC News Channel and found - if you count up the guests - plenty of pro-Remain interviewees but not one pro-Leave supporters (unless James Forsyth of the Spectator is pro-Leave, which I don't think he is.)

But that was only a snapshot, and who's to say that it's in any way representative? What if straight after I turned off, a parade of passionate Leave supporters appeared on the News Channel. I'd never know about them yet any 'bias-proving' statistics I'd drawn from what I'd observed would be worthless.

If 30 minutes isn't enough and 4 hours isn't enough, what would be? You'd need whole teams of people watching the BBC News Channel in shifts over at least a couple of weeks to do it properly - or at least properly enough for the wider world (including the BBC) to accept that it's been in any way worthwhile.

For the record, however, here's a complete list of all the interviews on the BBC News Channel from the end of David Cameron's Downing Street speech through to Dateline London at 5.30.

It includes full interviews and partial reprises of those interviews, but not the recurring clips of David Cameron, Jeremy Corbyn, Alex Salmond or Nigel Farage.

For what it's worth, that equates to 5 pro-REMAIN individuals and 8 pro-LEAVE individuals.

Now that, obviously, looks biased in favour of the Leave campaign. But - to repeat - all it shows is that Leave supporters got more air time than Remain supporters in the 5 or so hours of this afternoon's BBC News Channel. That really is all it shows.

This evening's News Channel could have a 20-minute interview with, say, Alan Johnson or Ken Clarke and the balance could tilt back again towards 'impartiality'. Or, with lots more pro-Remain interviews tonight, it could go on to bias the day's coverage against Leave instead.

You could, of course, keep watching till, say midnight, and find the same 'bias' as this afternoon but what if tomorrow, when you don't watch, the bias is outrageously in the other direction? And what if someone from the other camp was monitoring that and took to the pages of The Guardian to say so?

Unless you are able to monitor it in such a way that you are not left open to charges of cherry picking (i.e. choosing a half an hour, four hours, a day that 'proves' the point you're trying to demonstrate) then the BBC/your critics will be able to debunk you quite easily - especially if (a) they've watched what you've watched but seen more of it than you or (b) if they cherry picking a few hours of the News Channel (say around a particular campaign event) that 'proves' their point in contradiction to yours.

As for the BBC, it's well-resourced and secretive and it will always play the 'it has to be judged over time' card - across a suitable period, on a particular programme, etc. They won't accept you breaking their 'rules' over this, ever.

That's why it has to be 'closed' programmes like Today or Newsnight or PM (or whatever) that are monitored, if you're going to monitor such things. Months of evidence on individual programmes (no episodes missed) could prove bias to the satisfaction of any reasonable person, and be much harder for the BBC to dismiss.

I could go on but I wouldn't want you to lose the will to live.
Posted by Craig at 20:43